We need to honor his legacy.

Despite its massive success, Pokémon Go has at least one major failing: The shocking and total absence of Harambe, the silverback gorilla killed at the Cincinnati Zoo earlier this year.

True, Harambe—as an actual animal of a species that exists in the real world—was not a Pokémon. He was no monster, and he certainly wasn’t pocket-sized. But as the only cultural phenomenon to rival Pokémon Go in 2016, he deserves to appear in the game.

This, more or less, is the reasoning behind a Change.org petition addressed to Nintendo (which did not actually make Pokémon Go, much to its shareholders annoyance), demanding that the company add “the passed away ape” to the mobile game. 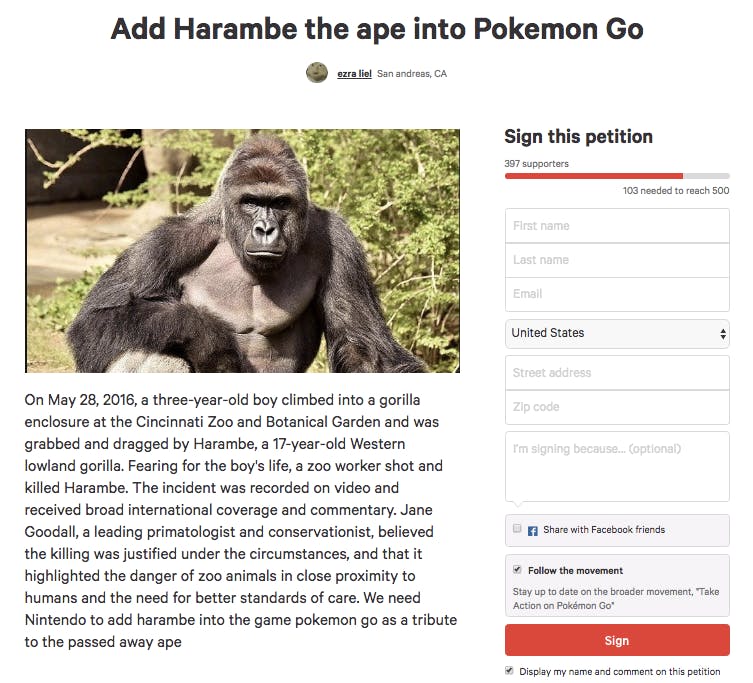 Supporters have been more than enthusiastic. Elijah Fraser dropped the hashtag #DICKSOUTFORHARAMBE, while Δημήτρης Κατσούκας noted that he signed “because Harambe was a big Pokémon fan and he would be honored to be in this game.”

And lest you think this is just a joke, petition organizer Ezra Liel’s only other Change.org page demands the indictment of Hillary Clinton. So yeah, they’re pretty serious.