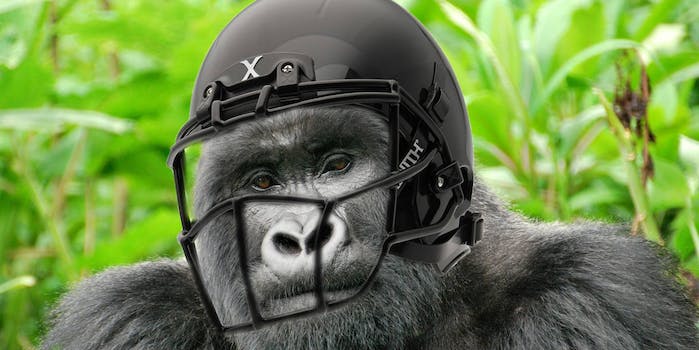 Our quest to find the MVP of Harambe activism.

Football season is upon us. Sure, the NFL still has a few more preseason games to go, but NCAA stars and promising high school athletes have already taken to fields around the country. Boston College QB Patrick Towles has been playing with a whole lot of heart, in part thanks to dedicating his entire season to Harambe.

Not every player can channel their grief over the silverback gorilla so effectively, though. It’s been three months since Harambe was fatally shot at the Cincinnati Zoo after a child entered his enclosure. Green Party candidate Jill Stein would know.

It’s safe to say that the world is still in mourning. Football fans are working through that grief and coming together for Harambe, though. This past weekend marked the opening game for countless high school football teams. Team pride happened to take a backseat to the plight of the ape who died.

But this is football. And this is America, where competition is one of the most patriotic things you can engage in. Which of these fans had the most Harambe spirit?

“Dicks out” chanters in Illinois

The Dicks out for Harambe movement has become one of the most highly touted out there. Hell, I made friends with a drunk man in a poncho last night all because he happened to utter the rallying “dicks out” battle cry. Even though his dick wasn’t out, it was in that moment that I knew we were brothers in Harambe solidarity. Getting an entire football fan base to cheer like that is a seriously powerful action.

A gotdamn school in Cincinnati

Somebody dressed up as Harambe at a Cincinnati high school football game. pic.twitter.com/4afDFBBa1g

Cincinnati High School reimagined that fateful day when Harambe shuffled off this mortal coil and turned it into the revenge story we all wished for. This isn’t to say anyone’s wishing mortal harm on a child. It’s clear from Harambe’s sideline glee that he just wants to roughhouse. No wonder he loved football so much.

Texas made it pretty damn clear that Harambe’s the real bad motherfucker you shouldn’t be messing with. Fans were out in droves with homemade signs that injected a bit of football pride with their mourning for the ape.

Is this the best display of Harambe pride from over the weekend? You tell me and maybe consider making your own outward, proud display of solidarity for an animal whose legend has only deepened since that fateful day in Cincinnati. Heroes never truly die, do they?