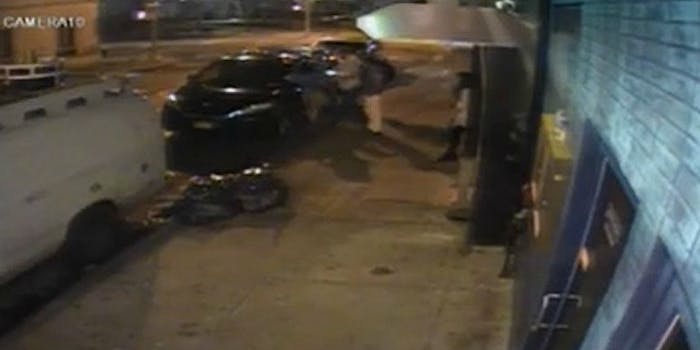 Pepper Ellett said she was raped. And she's not backing down.

After spending one recent evening at a New York City establishment called Happy Ending, a woman named Pepper Ellett took to Facebook late last month and said she had been drugged and raped by a bar employee.

As Gothamist writes, the bar recently released its surveillance video, entitled “Cameras Don’t Lie,” but it’s heavily edited and annotated and Happy Ending says the video shows “something completely different” than Ellett’s account of the incident.

Though the video is no longer available to the public and though Happy Ending’s statement has been deleted, Gothamist saved the video and screengrabbed the statement. 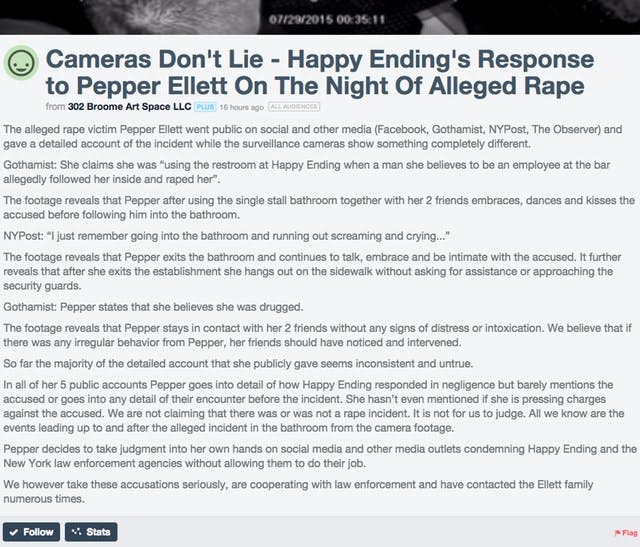 The footage shows Ellett and her two friends entering and exiting the bathroom and later dancing and kissing with the person she apparently has accused of rape.

The video captioo says that Ellett and the accused went to the bathroom together and were inside a single stall for 30 minutes. After they exit the bathroom, the video caption says the two continue to embrace and kiss, but it’s nearly impossible to tell what’s happening because the two are far from the camera — and it’s nearly impossible to see if Ellett is inebriated. Since there’s no sound, we also can’t hear the conversation between the two.

The video also shows Ellett leaving the bar with the caption, “Does not ask for assistance or approach security guards or manager.” Soon after, though, Ellett said she went to the hospital.

What does it say about the society we live in that in the day following my assault, I spent 10 straight hours without food between the hospital, SVU (Special Victims Unit) and in the care of policemen? I went through the rape kit, a pretty invasive and painful physical examination which included being penetrated with a dry speculum and having every bruise and laceration on my body photographed while 3 nurses stood in the room watching. I had to give my initial report to three white male cops (two of which were training) who not only made me feel like I was being interrogated, but weren’t even part of the precinct that would handle my case. I watched as my rape kit was clumsily handled, negligently being tossed around by a policeman … I was then passed off to two more male cops who, again, wouldn’t even be handling my case but still asked me to tell them my story. I was brought to SVU to be questioned yet again, this time in an interrogation room like a criminal and by a male investigator who also questioned the validity of my story …

What does it say about our culture that it took one phone call to the office manager of Happy Ending, while the investigator handling my case was doing nothing, to learn that the bar was made aware of the assault the night it happened (only because of my friend) and after reviewing security footage and verifying that what they saw corroborated my story, the owner did not call the police but thought firing the guy was an adequate solution?”

If the bar originally corroborated Ellett’s story, it doesn’t seem to be doing so now.

Ellett also told Gothamist that one of the police officers who questioned her insinuated that she was a party girl and told her that “regrettable sex is not the same as rape.” A bar rep told the New York Post that “The CCTV tapes show clearly that the alleged victim was seen kissing at the bar with the employee and was seen entering the bathroom of her own free will. It shows a 90 percent chance it was consensual behavior.”

In response to that, Ellett said in a statement, “This number cannot and has not been quantified or corroborated by law enforcement, not that it would ever be possible to place a numerical statistic on the likelihood of a rape occurring in the first place. This number does not speak louder than the physical evidence on my body, the witness reports, and even Happy Ending’s own urge to fire the employee that did this the night it happened after reviewing their own footage that they now reference in an attempt to invalidate my assault. … Adding static to deflect from the assault is both negligent and malicious, and to imply that kissing equals consent is a deeply problematic perpetuation of the heavy, crippling, monstrous cloud of shame and guilt that ignorant and selfish men in power continue to place on victims of violence.”

The bar later announced that a woman named Nadine Johnson had been fired for making those comments to the Post.

A police spokesman told Gothamist that no arrests have been made but that investigation is ongoing.