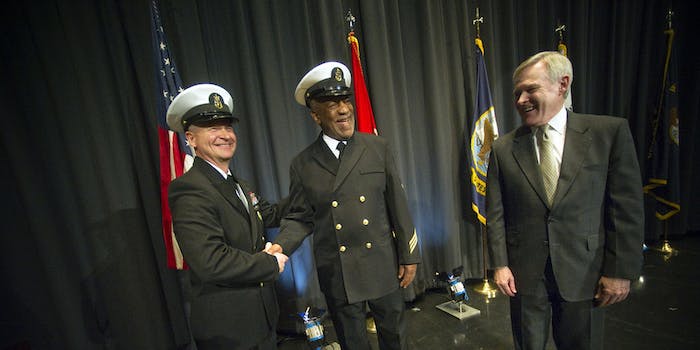 “Why didn’t our stories go viral?”

Barbara Bowman, a now-married artist living in Arizona and one-time alleged assault victim of celebrity Bill Cosby, justifiably asked this question in a Washington Post article last week. Bowman was, of course, referring to comedian Hannibal Buress‘ much-publicized stand-up performance last month at the Trocadero, in which Buress mocked Cosby’s hypocritical attempt to be a role model for the black community by plainly calling him a rapist.

But while Bowman is right to lament the fact that it took a man to echo her accusations for the public to start taking it seriously, there are productive lessons we can take away from Buress’ calling out, especially when it comes to how we tackle sexual assault in our own communities.

Buress was himself alluding to a 2005 civil lawsuit filed by Andrea Constand, in which she accused Cosby of having drugged and raped her a year before. As the trial proceeded, it was made clear that other women were willing to substantiate Constand’s claims with their own similar stories, Barbara Bowman included. Bowman was set to actually testify about her experiences with Cosby before his legal team reached an out-of-court settlement, dismissing the civil case and relegating the other women’s testimony to the dust bin. Since the trial’s conclusion in 2006, the assault accusations have rarely, or only briefly, been brought up in discussions and long profiles of Cosby’s life and career, even by critical essayists like Ta-Nehisi Coates. A biography released this year by Mark Whitaker apparently contains no mention of the allegations.

And while various outlets like People and Today have relayed the heartbreakingly detailed retellings of several Cosby victims like Bowman throughout the years, few of those stories have caused as much public shock as did Buress’ bit in a grainy minute-long video of a longer performance. Cosby’s public perception has seemingly changed dramatically overnight, when a disastrous campaign launched on Twitter last week by his PR team got hijacked; users quickly took the chance, via pithy memes, to remind the Internet of the 13 women who claimed they were raped by the cultural icon.

Over the weekend, a NPR interview with Cosby was released, with Scott Simon attempting to question Cosby about the resurfacing allegations only for him to shake his head “no” and refusing to comment. The reason why these questions had not been asked as frankly in the preceding eight years was left unsaid.

As Bowman notes in her article, it’s both encouraging and disheartening to realize that the public tide has only now turned against Cosby because a man repeated the same claims that have been loudly shouted out by the actual victims for almost a decade. Bowman is also right in describing the reaction of distrust when it comes to rape allegations, whether against famous people or not.

In 2012, U.K. researcher Clare Gunby and others surveyed a group of adults ages 18-24, finding that 47.7 percent of the men and 33.6 percent of the women believed that a significant amount of rape claims brought to the police were fraudulent. Smaller studies and interviews of law enforcement officials have found a similar skepticism of sexual assault claims.

It was that very skepticism that has allowed Cosby to escape closer scrutiny about the allegations for so long, playing to people’s disbelief that such a jovial, charismatic man could do something so horrible. For most in the media, Cosby’s refusal to answer questions about his “personal life” after the trial was a good enough excuse to avoid discussing it at all; leaving themselves free of the burden to reconcile his cultural impact from the man himself.

As Bowman tells it, this was true even as she was victimized repeatedly in the 1980’s, Cosby’s reputation for luring and manipulating young women into his company an open secret among his handlers and talent agents. While the allegations have only reached the public spotlight in the past decade, Bowman has spent the last 30 years since her experience trying to be heard and, as she points out, Cosby’s continued actions were only possible through a large network of enablers.

But Buress was able to provoke a newfound conversation about Cosby’s misdeeds not solely because he was a man—after all, there have been male journalists who openly reported on Cosby—but largely in part because he was a black male comedian. While he certainly doesn’t have Cosby’s pedigree, Buress is many ways the closest thing to a contemporary Cosby has. His peer. And it’s that distinction that lays bare the role that men can take in confronting sexual assault.

There is a self-imposed silence we carry when we hear of assault in our communities, a trepidation of violating niceties and rocking the boat. We worry about picking sides or making hasty generalizations, unaware or uncaring about the fact that by refusing to say anything at all, we’ve already picked a side.

And while there’s certainly a lingering presence of misogyny that explains our ignoring or dismissing the accounts of victims, that refusal is also, or even entirely for many, tied to a fear of facing the social ostracization and exclusion that comes with disturbing the status quo. Both men and women do this, but it’s men, justifiably or not (hint: it’s not), whose words hold more social influence, especially over other men.

Just last Thursday, the White House unveiled the latest in its new public health campaign aimed at curbing campus sexual assault, It’s On Us. Featuring Don Draper himself, actor Jon Hamm, as an omnipotent voice of reason, one of its PSAs shows a young man intervening when a woman is blocked from leaving a party by another man.

The campaign, unlike previous attempts to lecture women about leaving themselves too vulnerable, not-so-slyly putting the onus of rape prevention on the victim, instead focuses on the social conditions that allows rapists to operate without consequence. That focus is one that victim advocates and sexual assault experts have long tried to emphasize as a better way to curtail the vast majority of rapists, repeat offenders who manipulate their already established relationships to both select victims with less credibility and escape accountability from within their social circles.

And because sexual assault is rarely an isolated incident, bystander intervention doesn’t just mean preventing rape—it means standing alongside survivors after the fact. It means validating their experiences, realizing that the overwhelming majority of reported rapes are not in fact fraudulent. The best research tells us anywhere from 2-8 percent of police reports could be considered “false,” though even that is a complicated answer; early data shows that many of those reports involve women who either don’t name a perpetrator or have had a history of domestic abuse by their accused.

It also means amplifying the voices of victims who dare to wade into the social minefield that comes with exposing assault, realizing the heavy burden they carry in breaking that silence, and being supportive of those who choose not to, because sometimes the best thing to do is simply to survive.

Hannibal Buress didn’t offer caveats or disclaimers. He simply believed the claims of the 13 women and repeated them—that he packed them into a funny observation about the hypocrisy of a supposedly moral figurehead was icing on the irony cake. It was that validation, shareable on social media for all to watch again and again, that might have tipped the scales of public attention, much like the first person to notice a burning building and actually call out for help. By the time #Cosbymeme rolled around, people were finally willing to point to the giant elephant in the room, in a way that never would have been possible before the Internet.

That said, we should always be careful about the thin line between advocating for survivors and speaking over them. Buress was loudly repeating a claim that Bowman and others had wanted to be heard loudly (though even he never thought it would receive as much attention as it did), but often times survivors don’t need or particularly want a bullhorn as an ally—they need someone to affirm their lived experience and stand beside them in whatever capacity they can. It doesn’t take a YouTube video of a comedy bit to do that. Examples like former Jezebel writer Lindy West’s tumblr I Believe You It’s Not Your Fault showcase the power of allowing survivors to simply voice their own experiences. As a society though, we still have an obligation to ask ourselves what it means to be silent in the face of sexual assault.

Following this year’s Golden Globes, Woody Allen faced his own past allegations of sexual abuse, with a Vanity Fair interview with Dylan Farrow reaffirming that at the age of seven, she had been molested by her adoptive father 21 years ago. A subsequent open letter in the New York Times by Malone this February went into further detail and put the question of accountability to Allen’s long list of colleagues in Hollywood, who have either remained silent or outright stood behind the renowned director. “What if it had been your child, Cate Blanchett? Louis C.K.? Alec Baldwin?” Farrow asked. “What if it had been you, Emma Stone? Or you, Scarlett Johansson? You knew me when I was a little girl, Diane Keaton. Have you forgotten me?”

Farrow’s letter went largely ignored by the stars listed, though Blanchett and Baldwin released statements that forcibly took no sides. Soon after, the Allen hubhub faded in the public consciousness, and Allen went about business as usual, releasing his annual film. Will the same happen to Cosby? I don’t know. As of yesterday, a 14th woman came forward with her account of assault at the hands of Cosby in 1969, adding another brushfire for the Cosby camp to put out. Yet Cosby still has an upcoming comedy special on Netflix later this month and a contract for a comedy pilot on NBC, and there are plenty of fans and column writers lining up to defend him from the court of public opinion.

Barbara Bowman wondered why it took so long for the public to start listening to her and others’ stories. I’m wondering whether we’re capable of doing anything with that information now that we have.