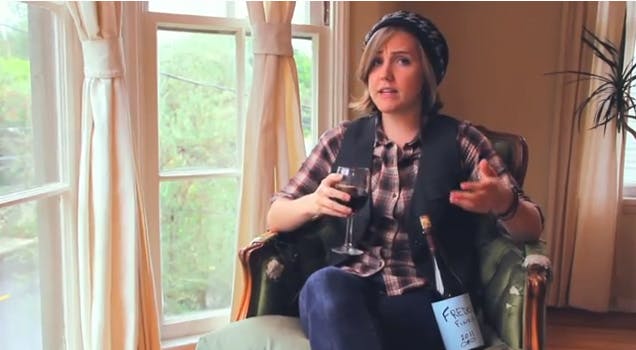 Harto, the beloved, intoxicated star of "My Drunk Kitchen," is taking her YouTube show on the road.

“My Drunk Kitchen” may be coming to a city near you.

Hannah Hart, the creator of the popular YouTube series, launched an Indiegogo fundraiser Thursday in order to take her show on the road.

Titled “Hello Harto: The Tour Show,” Hart wants to raise $50,000 so that she can rent an RV, drive around the U.S. for the month of April and visit at least 10-12 cities based on the number of donations per capita—although if she passes her goal, she will be able to visit more cities (and possibly Canada and Europe).

Hart started “My Drunk Kitchen” after making a one-off video for a friend in 2011, and since then she’s made more drunken cooking tutorials, music and advice videos, even building a community of “Hartosexuals.”

While she’s been able to interact with her community on a daily basis, there was one thing that Hart wasn’t able to accomplish until now.

“But there’s always been one thing that they’ve asked for that I’ve never been able to give to my community, and that is a tour,” Hart said.

Hart explained on her Indiegogo page that the tour will be in three parts. In each city, she will film a video blog of her musings, a travel video where she’ll go to different places recommended by funders and she’ll film an episode of “My Drunk Kitchen” in a randomly-selected funder’s home.

Like other online fundraisers, Hart is offering a number of perks to contributors including a postcard from the road, an e-marriage certificate, poems, and personalized videos.

Keeping complete creative control was an important factor for Hart, but she noted that she would deck herself out “like a human Nascar” if corporations wanted to contribute.

Hart raised $36,000 on Indiegogo within four hours of posting the fundraiser on Indiegogo, with no sign of slowing down. She made a video commemorating reaching $25,000 in which a clearly ecstatic Hart ran around her house and belted Bon Jovi.

“We’re halfway there, I can’t even process this,” she said, as she had a drink for her nerves.