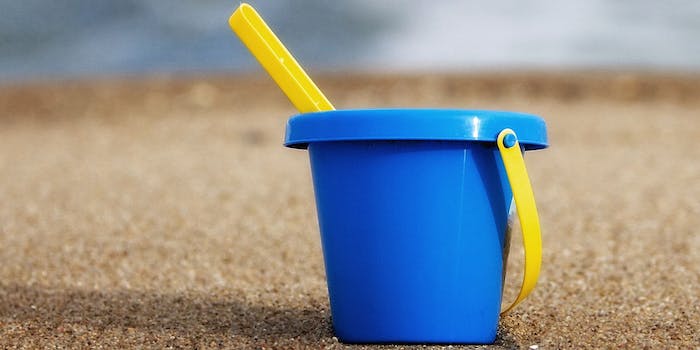 Psst! It's pretty much just a bucket.

An ice bucket challenge costume, which consists of a plastic bucket, a plastic ice tray, and a “Faux Water Film” that appears to be a fishing net adorned with baubles that in no way look like ice cubes, is now available for $40.

There’s one nice thing about it: $10 from that purchase goes to charity, says its seller, BrandsOnSale. Otherwise, it’s harder to imagine a dumber costume, considering a bucket and ice cube tray should cost you less than $5, and an online sensation your mom saw on Facebook in early August probably won’t get a bunch of laughs at the end of October.

And the company’s weirdly dismissive about the challenge itself, calling it “latest craze in ‘slacktivism.'” While the joke certainly seems to have run its course, people are still responding in a very real way: The ALS Association estimates the challenge is directly responsible for more than $60 million in donations in the three and a half weeks since it’s gone viral. During the same period last year, the association raised $2.4 million.

Also, how dumb is a costume that you have to hold above your head all day? Your arms are going to get so tired. If you put them down, you’re just some dolt holding a bucket. Just some dolt.

H/T The Independent | Photo by David/Flickr