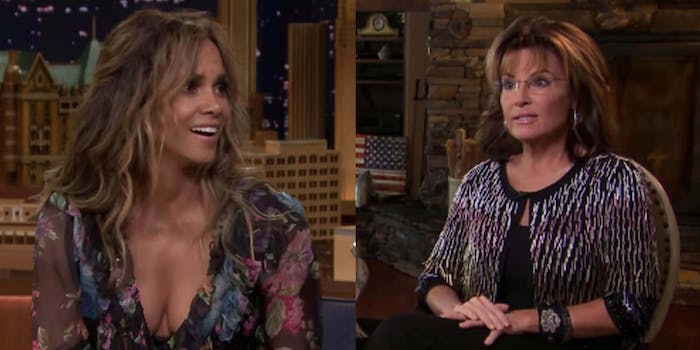 We all have relatives we wish we didn’t have to claim. And fortunately, the farther out the branches in our family tree reach, the less likely anyone will have to know about those skeletons better left in the closet. Unfortunately, this is far less true for celebrities whose lives are under constant scrutiny.

Halle Berry learned that back in 2012 when she uncovered the disappointing news that one of her distant relatives is none other than former Alaskan Gov. Sarah Palin.

“You want to know who I’m related to? Sarah Palin!” Berry told Extra in an interview at the time, sharing her horrified reaction over the connection, though she admitted the exact nature of the relationship isn’t clear.

A tweet from Daily Blast LIVE reminded the Gothika actress of the unfortunate shared DNA last week, and it’s clear that Berry is still taking the news with a good dose of humor.

“She may be on the tree but she ‘AINT invited to the cookout,” she tweeted.

“This is the energy we need for 2020,” Twitter user @agentcutiepie wrote.

Others reacted with memes.

Palin was thrust into the spotlight as John McCain’s running mate during the 2008 election and became known for her pro-religion, pro-gun, and anti-abortion views. The conservative politician also became the butt of some of the best Saturday Night Live jokes, where she was portrayed by Tina Fey, and ultimately shifted the attention into a short-lived reality show called Sarah Palin’s Alaska.

At the time, it felt like a dark and cynical moment in America’s political history, but of course, we’ve managed to trump that dissolution of the line between politician and reality TV star at this point.

Berry, on the other hand, supported former President Barack Obama during the 2008 election, and ultimately even had his oldest daughter Malia as an intern on her CBS series Extant.

So, it’s pretty safe to say there’s not much chance of a happy family reunion between the Berry and Palin branches of this twisted tree. But we are so here for the Twitter shade.