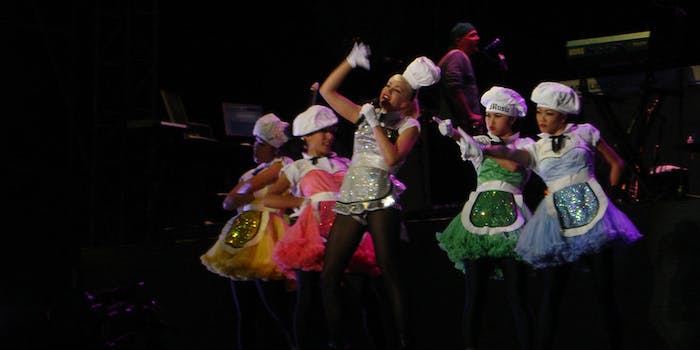 Dear Gwen Stefani, cultural appropriation is not a "compliment."

Over 10 years after Gwen Stefani enlisted a gaggle of silent Japanese girls to follow her around everywhere and dance on command, she still doesn’t see anything wrong with it. In a recent interview with Time, the 45-year-old singer called her Harajuku phase a “compliment.” Stefani says, “For me, everything that I did with the Harajuku Girls was just a pure compliment and being a fan. You can’t be a fan of somebody else? Or another culture? Of course, you can. Of course, you can celebrate other cultures. That’s what Japanese culture and American culture have done.”

For those who are unfamiliar (and reading this essay from inside a electric cave), Stefani released her first solo album, 2004’s Love. Angel. Music. Baby., with an unusual marketing stunt. A group of four women, known as the Harajuku girls, acted as her PR posse. Although we remember it as “controversial” with the rose-colored glasses of the present, Stefani all but got away with it. A blog post from comedian Margaret Cho argued that Stefani was putting on “a minstrel show,” but Stefani shot it down with nary a peep from the media. ”She didn’t do her research!” Stefani told Entertainment Weekly. “It pisses me off that [Cho] would not do the research and then talk out like that. It’s just so embarrassing for her. The Harajuku Girls is an art project. It’s fun!”

What’s really embarrassing here isn’t Cho’s criticism but the way in which the valid concerns of an actual Asian person were dismissed so a nice white lady could keep having a good time with her Japanese friends—or rather, the women who were contractually obligated to never speak in public, to her or each other. For whom does that sound fun? Although no one can doubt that Stefani really likes Japan, it’s even more embarrassing that Stefani hasn’t used the past decade to educate herself on cultural appropriation—all she has to do is Google herself next to the term. As the foibles of pop stars like Katy Perry, Sky Ferreira, Iggy Azalea, and Miley Cyrus continually make headlines, there’s no excuse for getting race so wrong.

First off, an explainer. Cultural appropriation refers to a practice in which people use a culture that’s not their own as a costume or a prop. According to Fordham University Law professor Susan Scafaldi, “it’s most likely to be harmful when the source community is a minority group that has been oppressed or exploited in other ways or when the object of appropriation is particularly sensitive, e.g. sacred objects.” Around Halloween, this manifests as white girls dressing up like Pocahontas—or a bunch of fraternity members throwing a blackface party. If there’s any question on the matter, a good rule of thumb is poll five to ten members of the group you’re “celebrating.” Do they say it’s racist? Then don’t do it. (If you don’t have five black friends, a) examine that and b) refer to this Cultural Appropriation bingo sheet.)

In a post for Everyday Feminism, Jarune Uwujaren explains that it’s not about policing what people wear but reminding people that inequalities still exist in society. “Cultural appropriation is itself a real issue because it demonstrates the imbalance of power that still remains between cultures that have been colonized and the ex-colonizers,” she writes. Those with the power to appropriate marginalized cultures (like Selena Gomez or even Pharrell) have the ability to frame how we view them, as that culture has few resources to represent itself. Would most Americans even have heard of Harajuku street life without Gwen Stefani? This is unlikely, especially considering how few Japanese pop singers or Asian celebrities are popular in the U.S. They simply don’t have the platform.

What makes Stefani’s sins even more egregious are the Harajuku Girls’ contractually obligated silence. The Harajuku Girls didn’t exist to inform and educate the American public about the beauty of Japanese culture, but to help a rich person launch a clothing line. For Rookie’s Jamia Wilson, this is the exact problem with Stefani’s appropriative tendencies, which also include sporting a bindi onstage; Stefani gets all the benefits of enjoying a culture without any of the downsides of actually inhabiting it (i.e., dealing with the racism Indian women experience on a daily basis). Wilson says, “Gwen can play with a bindi all she wants, but she won’t be judged, taunted, hated, or unsafe in certain places for wearing one, because she exists in a body that aligns with the dominant paradigm.” Whereas wearing a hoodie made Trayvon appear “dangerous,” appropriating black culture makes Sky Ferreira look “hip.”

Earlier this year, Katy Perry fell in the same trap, accused of “yellowface” after wearing a kimono onstage during a performance of “Unconditionally.” Rather than apologizing, Perry pulled a Gwen Stefani and threw up her hands: “I guess I’ll just stick to baseball and hot dogs, and that’s it,” Perry told Rolling Stone. “I know that’s a quote that’s gonna come to fuck me in the ass, but can’t you appreciate a culture? I guess, like, everybody has to stay in their lane? I don’t know.” According to Jezebel’s Madeleine Davies, this is a common response when pop stars get called out for racism. Davies says, “Pop stars love to break down cultural appropriation arguments this way, as if their only options as ‘fans’ are to include cartoonish depictions of a culture or ignore a culture completely.”

What Perry and Stefani seem to forget is that racism isn’t just the KKK or Paula Deen casually using the “N-word.” As Canada.com’s Lauren Strapapagiel argues, everyday racism can be far more invisible. “Racism is not just pointing at a minority and calling them a bad name,” she writes. “It’s also, importantly, cultural norms and ideas that oppress racialized persons in a systemic fashion. You know, like presenting Japanese women as passive, adorable background decoration for a wealthy North American pop singer.” After all, Stefani isn’t the only person to mute Asian women—Hollywood does it all the time. If you manage to even land a part in a movie, chances are you’ll be a submissive geisha or a stock Asian girlfriend with almost no lines (see: Looper and The Girl with the Dragon Tattoo).

The example of Tinseltown offers a further reminder that in addition to being offensive, cultural appropriation is also lucrative. Stefani also launched a kids’ clothing line at Target, Harajuku Mini, which looks like what would happen if Hot Topic vomited all over Oshkosh. Stefani once sang that her goal is “a ping pong match between eastern and western,” but it’s difficult to see how her clothes accomplish that. According to Davies, Stefani’s project could have benefited “by [collaborating] with Japanese musicians and artists and created a cool hybrid thing where everyone had input and equal billing.” Davies says, “What she did instead was repurpose a highly stylized element of Japanese culture, take away context, and place herself in front of the whole thing as a leader and creator.”

There can be a distinct benefit from white people experiencing and participating in Japanese culture. Alain Resnais’ Hiroshima Mon Amour is an important document of a city decimated by nuclear disaster, a piece of cinematic history that was a powerful confrontation of the realities of war. Similarly, Sofia Coppola’s melancholy and masterful Lost in Translation is a reminder that we are all just visitors in someone else’s culture—looking for connection and a shared language, while still just strangers wandering in a foreign city; it’s a reminder that even as we’re alone, we’re not so different. While admittedly imperfect, these films open up a dialogue about what it means to meet in the middle of cultural exchange—rather than stifling conversation.

Gwen Stefani wants her critics to just shut up already, but clearly that method hasn’t worked so well for her in the past. If she really wants to take something meaningful from the culture she claims to admire, she might learn to finally listen.