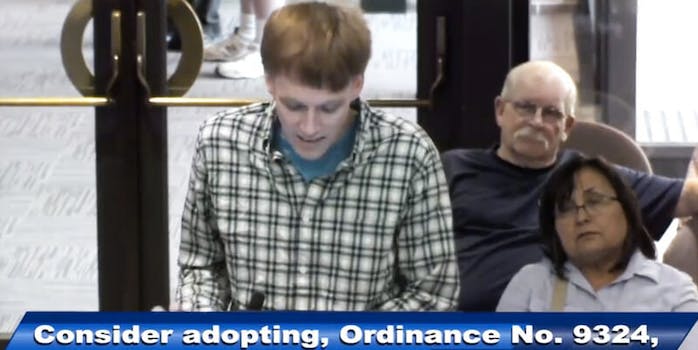 'That would truly be a happy ending for everyone.'

Last month, a video from a Lawrence, Kansas city council meeting went viral when a concerned citizen named Chris Flowers stood in front of the board of commissioners and made a compelling, two-and-a-half minute long argument for legalizing hand jobs.

If you haven’t seen it yet, or just want to watch again (we wouldn’t blame you), you can view the video below.

Essentially his argument boiled down to the legalization of handies would eliminate sex trafficking and sex slavery. He also attempted to make the point that giving a hand job was not that much different than proctologists sticking things in peoples anuses, or a massage therapist having to give a full body massage to a “big old sweaty fat guy” and having to get up in the folds of skin. Plus, you know, there would be the added bonus of legal hand jobs!

“So if someone wants to yank a guy’s crank, I say let them,” Flowers nervously stammered. He finished with the kicker that if Lawrence were to pass legalized prostitution like he was suggesting, “that would truly be a happy ending for everyone.” God bless the U S of A.

Indeed, it was probably the most impassioned public argument since Patton Oswalt’s Parks and Recreation filibuster. We would also be remiss without giving a shout out to the guy with the mustache in the background who did his best to keep a straight face throughout the whole thing.

The clip made its way around the internet and even to Jimmy Kimmel Live, however it was unclear why Flowers—who is apparently a familiar face at these meetings, according to the Kansas City Star—was so focused on hand jobs, in particular.

As it turns out, his comment was part of a public forum for voting on a specific proposed ordinance for licensing massage and bodywork providers in the city of Lawrence. Because Kansas is one of the few states that doesn’t require this type of license, local law enforcement had been uncovering fake massage practices that were contributing to sex trafficking.

In an email to the Daily Dot, City Commissioner Jennifer Ananda said that “Mr. Flowers, like any member of the public, may comment for up to three minutes during public comment about any item that will come for a vote.”

“He conflated sex work and the massage therapy industry, an industry which, because of the use of fake fronts and human trafficking (often non-consensual and illegal sexual services), has experienced sexual harassment and solicitation of sex acts from clients that is unwanted and sometimes threatening,” she continued.

It’s unclear how Flowers suggestion would have solved that double-pronged issue, but nevertheless, the ordinance did indeed pass, only without the added contingency of legalizing prostitution.

Well, you have to admit that Flowers, who unfortunately could not be reached for comment, is nothing else if not a character. May he one day see his dream of legal hand jobs realized, but in the meantime, he can sleep well at night knowing his community is now that much safer.