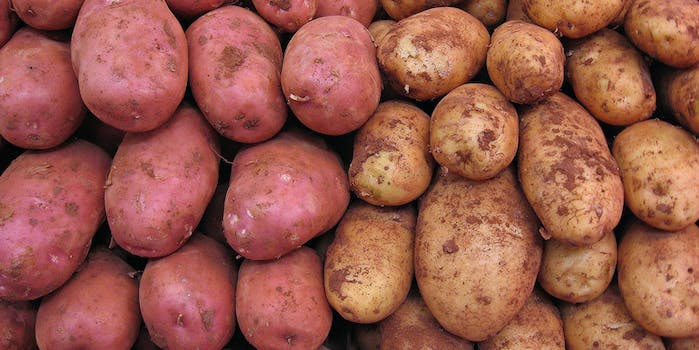 This spud's for you, kid.

Dinner with your significant other’s parents can be quite a stressful situation. You might accidentally insult the cooking or trigger a heated political debate. But for one guy, it was the choice to pretend he’d never seen a potato before that spiraled into catastrophe.

Reddit user “NotKnowPotato” posted his spud story to r/TIFU, or “Today, I Fucked Up,” a subreddit dedicated to personal mistakes of the highest caliber. Nervous about meeting his girlfriend’s parents, he wrote, he decided to make a good impression by showing off his humorous side:

When I saw that baked potatoes were served I got the idea that it would be very good if I pretended I did not know what potatoes was. That would be funny.

Well let me tell you: backfired on my face. I’ll tell you how.

So first when the potato became on my plate, I acted very interesting. I showed an expression on my face so as to seem that I was confused, astounded but in a restrained way, curious, and interested. They did notice, and seemed confused, but did not remark. So I asked “This looks very interesting. What is this?”
They stared at me and the mother said “It’s a baked potato.” And I was saying “Oh, interesting, a baked….what is it again?”

And I was like “A ‘potato’, oh interesting. Never heard of a potato, looks pretty good.”

And then they didn’t see I was clowning, but thought I really did not know what is a potato. So I knew I would be very shamed, humiliated, depressed, and disgusted if I admitted to making a bad joke, so what I did was to act as if it was not a joke but I committed to the act of pretending I didn’t know what a potato is.

You can read the rest of the story here, but as you might imagine, his girlfriend’s parents didn’t appreciate the gag. They kicked him out of the house, and now he has no choice but to stick to his half-baked story.

Fake it till you make it, right?