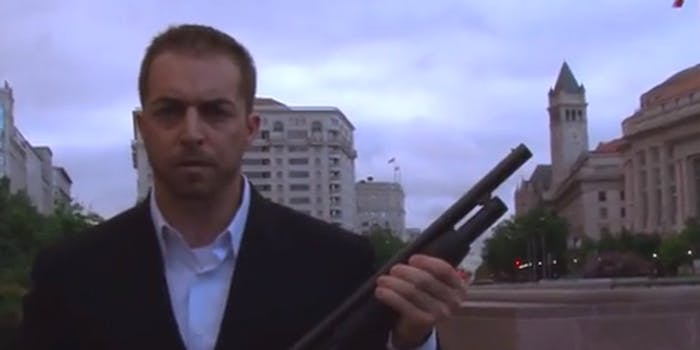 Adam Kokesh's one-man march on Washington resulted in 300,000 views on YouTube and a visit from a SWAT team.

Kokesh, who maintains a popular hour-long weekday podcast called Adam Vs. The Man, alongside a propagandistic, forum-based website teeming with anti-government merchandise, has previously been arrested for his protest activities.

What got him in trouble this time, however, was a recording of his act of defiance. Kokesh had been planning an “Open Carry March” in Washington, D.C. Law enforcement’s promise to arrest anyone involved in such on the spot caused the event to fizzle. But when the day came, Kokesh took to the capital’s Freedom Plaza to film himself loading and cocking a shotgun in public while delivering a short, cryptic, revolutionary message.

He expanded on his brief comments in the video’s description:

The time to sit idly by has passed, to remain neutral is to be complicit, just doing your job is not an excuse, and the line in the sand has been drawn between we the people, and the criminals in Washington, DC. While some timid souls will say that it is too early, that we can solve this problem through democratic means provided by government, that current levels of taxation are reasonable for the services provided, and that the crimes of this government are merely a tolerable nuisance; it may already be too late. While there is risk in drastic action, the greater danger lies in allowing this government to continue unchallenged. We will not be silent, we will not obey, we will not allow the government to destroy our humanity: we are The Final American Revolution.

With more than 300,000 views, the alarming clip drew praise from like-minded fans:

The local authorities, however, were not so impressed. Less than a week later, they made their move against Kokesh, searching his home, allegedly to find the shotgun he had flaunted. As the Washington Post reported:

A U.S. Park Police SWAT team and other officers knocked on the door of his single-family home on a quiet Herndon cul-de-sac, then kicked the door in and tossed a flash grenade into the foyer as police helicopters whirled overhead, his roommates said.

The rabble-rouser and Iraq war veteran who promised “we will not obey” on the video and has advocated for overthrow of the government “by whatever means necessary” was removed in handcuffs and charged with possession of hallucinogenic mushrooms while possessing a firearm, according to court papers. His housemates allege that they were mistreated by police, who they say used too much force.

Masked and armored police in full “Storm Trooper” gear flooded in and ransacked the residence. The team was cordoned in a front room, while Adam was pulled aside for questioning.

Over the course of the next five hours, the police searched every corner of the house with canine units and blueprints to the house obtained prior to the search. All officers refused to speak to the crew while they we being detained. They confiscated cell phones and personal items with force. Throughout the ordeal, the police repeatedly showed a volatile desire to initiate aggressive, forceful conduct with detainees. At one point, Adam politely requested to use the restroom and was kicked by the officer forcing him to sit handcuffed on the floor.

In all likelihood, Kokesh had wanted to provoke a police response on the day of his one-man “march,” not a subsequent tactical raid on his suburban retreat. When simply brandishing a shotgun on the streets of D.C. didn’t get him any attention, YouTube certainly did.