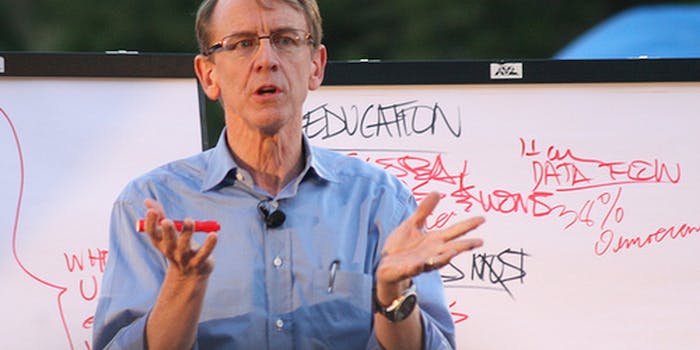 Guccifer has moved on from politicos like George W. Bush and Hillary Clinton to one of Silicon Valley's most famous investors, John Doerr.

Silicon Valley venture capitalist John Doerr, whose firm, Kleiner, Perkins, Caufield and Byers, has invested in everything from iPhone apps to green tech to Twitter,  was hacked by “Guccifer” several days ago, according to The Smoking Gun.

The fact that it was Doerr’s AOL email account that was hacked lends further evidence to the theory that Guccifer possesses an exploit specifically geared to break AOL. The hacked Clinton, Bush and Powell emails also came from AOL.com accounts.

Doerr has been instrumental in the rise of the Silicon Valley, investing in companies that include Twitter, Amazon and Google. His worth is estimated at $2.7 billion. Powell was an advisor to his firm, Kleiner Perkins, so perhaps there was a connection there.

The emails from Doerr’s account sent to TSG were accompanied by a note saying, “do you like my new face? i wear glasses right now an I have 2 zillion + in my bank accounts:))”

How Kleiner Perkins may fit into Guccifer’s apparent conspiracy theory mindset is unclear. The hacker has posted “Illuminati” references along with his various email leaks, but they could be simply a gag.

Although Guccifer’s targets thus far have been high-profile, one source familiar with hacking told the Daily Dot that Guccifer is one of the few hacking groups not devoted primarily to increasing their own fame.

So, unless Guccifer is sincere about fighting an Illuminati conspiracy, the hacker (or hackers) appear to be breaking into famous people’s email accounts strictly for the lulz.