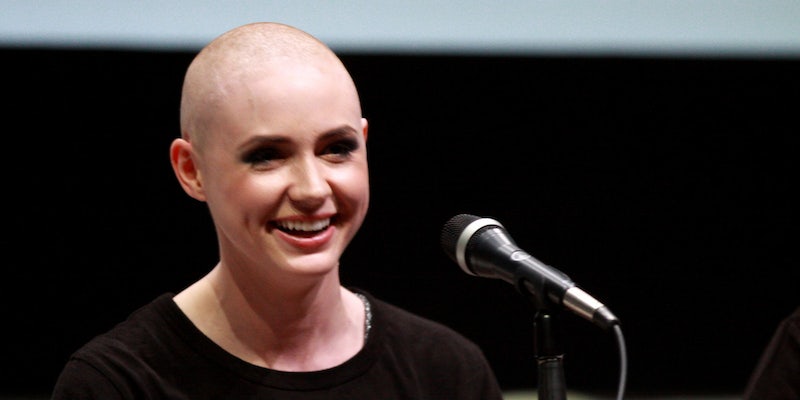 For her role as the alien supervillain Nebula in Guardians of the Galaxy, Karen Gillan had to shave her head.

If you follow geek culture news, you’ll almost certainly know this already, because her hair is the only thing anyone seems interested in when discussing this character.

Guardians of the Galaxy isn’t out until August, so the full force of Marvel’s media blitzkrieg is yet to be unleashed. Still, it’s already easy to predict what kind of questions Gillan will face during the publicity tour. From the dramatic unveiling of her bald head at last year’s San Diego Comic-Con to a recent Facebook Q&A with fans, the focus has been on Gillan’s heart-wrenching decision to shave her hair. When you type her name into Google, two of the first autocomplete suggestions are “hot” and “bald.”

What was it like to shave it off? Was it upsetting, or empowering? Does her head feel cold? Do people look at her differently? Did she ask Natalie Portman for advice?

Is the loss of a few years of hair growth not worth a hefty paycheck and a major role in Marvel’s latest summer blockbuster franchise? It’s not like she cut off a limb.

To a certain extent, this level of attention makes sense. It’s relatively unusual to see bald women in everyday life, nevermind in the image-obsessed world of Hollywood celebrity. As the old adage goes, a woman’s hair is her crowning glory. Shaving it off usually causes people to assume that she’s either going through chemotherapy or embracing some kind of transgressive punk rock phase. Britney Spears’ decision to shave her head is an iconic example, cemented in the public consciousness as visual evidence of a “breakdown,” and generally perceived as far more shocking than her various stints in rehab.

In Hollywood, body transformation has become synonymous with dedication to a role. When Tom Hardy or Christian Bale gains or loses weight for a movie, it’s heralded as a triumph of method acting. However, this kind of commentary is always incredibly gendered.

While male actors are praised for their dedication (Matthew McConaughey and Jared Leto’s dramatic weight loss for Dallas Buyers Club) or strength (pretty much any superhero actor ever), a woman’s bodily transformation is always framed in terms of her attractiveness.

When Renee Zellweger received an Oscar nomination for Bridget Jones’s Diary, it was at least partly attributed to the heroic way she sacrificed her slim figure for the role. What could be more shocking than a thin woman voluntarily choosing to get fat? And as for the response to Natalie Portman when she shaved her head for V for Vendetta, well, look no further than what Karen Gillan will be talking about for the next three months.

Even without the supposedly mesmerizing addition of a bald head, actresses in this type of movie are regularly discussed as if their main contribution is sex appeal.

Take Scarlett Johansson’s performance as Black Widow in the Avengers movies. Despite the fact that Black Widow’s costume is no tighter or more revealing than the outfits worn by Hawkeye or Captain America, film critics persist in describing her as a “leather-clad” fembot rather than the morally ambiguous spy we saw in Captain America: The Winter Soldier.

During the Avengers press tour, Johansson was repeatedly asked whether she was wearing underwear beneath Black Widow’s catsuit. Similarly, the male Avengers actors would be asked about character development, while she got the “rabbit food questions” about how she dieted to fit into her costume.

Guardians of the Galaxy is far more obscure than Marvel Studios’ previous movies, so the movie’s early publicity materials have mostly focused on explaining what it actually is.

The first trailer helpfully tells us that the Guardians are a team of soldiers and criminals, headed up by Chris Pratt as the dorkily named Star Lord. Gillan’s character, Nebula, only shows up for a few seconds, but anyone who is interested in this kind of thing will at least be vaguely aware of her presence. Gillan is already a geek culture celebrity thanks to her three-season run as Amy Pond on Doctor Who, and Nebula will be Marvel’s first female supervillain.

As an A-list actress with an integral role in the Avengers franchise, Scarlett Johansson was allowed to lose her patience with sexist interviewers. Karen Gillan will have no such luxury. She’s at the beginning of her career, and complaining about hair-related questions will not seem nearly so cool and badass as ScarJo’s jovial takedowns of all those creepy underwear comments.

Still, by the end of GotG’s months-long publicity campaign, Gillan will surely be sick of hearing more questions about her scalp than about her performance. And so will we.

Right now, you’d be forgiven for knowing nothing about Nebula other than the fact that she doesn’t have any hair. This is a crying shame, because Nebula is a cyborg space pirate with an artificial robot eye and arm. She’s likely to act as foil to Zoe Saldana’s character Gamora, since like Thor and Loki, the pair of them were raised as siblings before one of them (in this case Gamora) left the fold. Pretty damn cool, right?

Nebula would already be way more popular if people mentioned this first, rather than talking about Karen Gillan’s apparently mindblowing ability to look beautiful while bald.