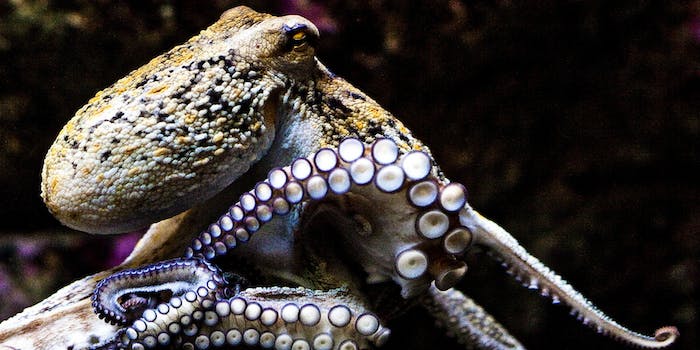 Eight reasons to do your shopping IRL.

What has eight limbs and will keep you from making sandwiches? An octopus delivered to your home in lieu of a loaf of walnut bread.

The convenience of doing your grocery shopping online has a price, it seems. When the U.K. retail chain Tesco is out of a particular product, they’ll attempt to substitute something similar—though with limited success, as one man found:

Tesco’s social media team—whose main job seems to be apologizing to irate customers venting on Twitter—replied not to Goodger but someone who reposted his photo shortly after it first appeared:

@LordSkipVC This has ten-tickled us so much! Maybe the personal shopper was trying to be Billy the Squid? =D

@LordSkipVC We must say we hope he’s not poorly! Maybe we can send him a friend from the sea, hopefully then, he’ll be happy as can be.

@LordSkipVC Jokes aside! I’m sorry for the poor substitution. DM me your details and I’ll refund a couple of squid! :-)

These ill-considered swaps have become something of a running joke among hungry Brits, though many remain resistant to the idea of picking up essentials in person.

@Thanks_Jack Hi Paul, that is an odd substitute, sorry about that. Did you leave it for a refund/only notice afterwards? #HereToHelp – Leah

We’re sure they’ll get the hang of it eventually—but we may be taking our meals in pill form by then.

@Tesco I’m halfway through my toast and I haven’t been attacked by a squid. Today must be good day #squidattack