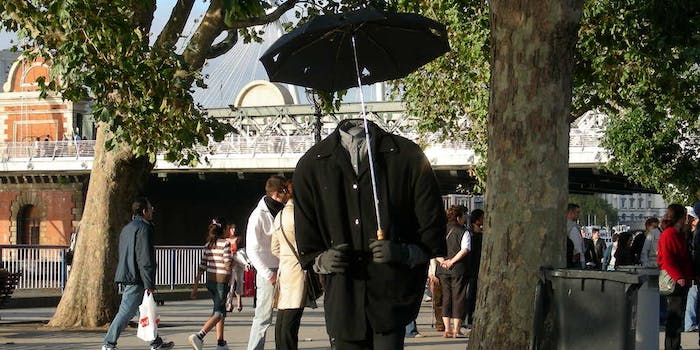 Here's what I found out about the stories behind Grindr's disembodied torsos.

In 2013, I was living in Sydney, Australia, and like many other gay men, I was addicted to Grindr. As a single guy, being able to view the other gay men nearby all from the comfort of my living room was, at first, a novel concept. Not being the most confident person at a bar or a party, Grindr opened up a new and less daunting way to meet guys. However, as I became more and more addicted, I realized that it was beginning to impact my self-confidence, mostly around my body image.

For those of you who have been on Grindr, you’ll know that about 50 percent of the little square pictures around you are usually headless torsos. These torsos are almost always well-built and shiny, reminding us of the lack of time we’ve spent at the gym lately. It’s hard not to think, “if only I had that body, maybe I’d be getting less rejection.” This thought leads to a lot of negative assumptions and a lot of judgment.

The etiquette on Grindr can be quite nasty if you don’t know how to shrug it off. People choosing to ignore you after you send them a few extra pictures of yourself upon request. Or profiles with a whole lot of nos in them.

With only a few small pictures and usually even fewer words about a person to go by, the world of Grindr seems like a very disconnected space.

And yet, behind every square picture (even the headless toned torsos) lies a human being with a story, and this is what a lot of gay guys are starting to forget.

So, I decided to start an experiment. As a filmmaker, I always start by asking myself a question and then using my films to help find an answer. My question here was: Is Grindr good for the gay community or are my feelings of negativity towards it justified? Is it disconnecting us more than bringing us together?

I changed my Grindr profile, adding a call for men to share their stories with me. My rules were that I had to meet them on Grindr (or Scruff), they had to be a complete stranger, and that I would only film their naked torso when I interviewed them. I wanted to make a statement about the real bodies of Grindr—the different shapes, sizes, and colors. I also knew that after seeing someone’s torso, the viewer would make instant assumptions, but after hearing this person’s story, those assumptions would be challenged.

My travels next took me to Iceland, and I began the second series of TORSO in Reykjavik.

Now in a new city, the project began to chart the differences of online gay culture based on location. In Reykjavik, I learned that due to the small population, gay tourists were extremely popular with Icelanders. For some gay Icelanders, tourists were their key target on Grindr because after a fling with a tourist you wouldn’t have to run into them at the supermarket every second day, which is almost a guarantee in such a small city.

Despite the differences based on location, the stories all shared so many similarities. These men had found love and lost it, become jaded and deleted Grindr only to re-download it soon after, had someone lie to them about their age and appearance and in a lot of cases slept with them anyway. It was a beautiful thing to be able to laugh (and sometimes cry) with the men I met as they shared stories I could relate to.

My next stop for the series was Los Angeles. I wanted to find more stories here, and I was determined that I find them in all corners of the city. I met a man married with children, who snuck around on Grindr, convinced it wasn’t cheating because it was “something his wife couldn’t give him.”

I met a twenty-year-old guy living with HIV. I remember thinking before I met him (because he advertised his HIV status on his profile): How does someone so young get HIV? My first assumption was that it was a lack of education on the risk of infection. I was wrong. He had been taken advantage of by an older man. His drink had been spiked while on a Grindr date, allowing the man to have unprotected sex with him. Later he discovered he was HIV positive. When he approached the man who gave it to him, the man’s response was simply: “Good, you deserve it.”

A heartbreaking story at first soon revealed itself as one of incredible strengths. After finding out his HIV status, the twenty-year-old decided he would not hide it. The stigma he encountered from within the online gay community was horrible. He received comments like: “You’re twenty years old and you’re HIV positive, what a waste.” Despite all the surprising ignorance and negativity he faced, he continued meeting people through Grindr, some of whom are now very close friends.

After hearing his story, I realized the project was more than just telling stories about Grindr; it was about shedding light on this community and on the issues we face, reminding those who use Grindr to be more kind to each other.

TORSO has also made me come to realize that online apps have marked a shift in gay dating culture. It now seems harder to obtain and sustain a relationship because there’s always the ever-tempting thought of all the other men around you who are so accessible. As one of the men I interviewed said: “You come to dread that moment after dating someone a little while, thinking you’re exclusive, when you hear the familiar Grindr message tone buzz from the phone in his pocket.”

But despite this and the many other negative things that have surfaced from Grindr, my experience has left me as a strong defender of the app. I now see its purpose, for myself and many others I’ve interviewed, as an important gateway into the gay community, a space that before apps like Grindr was less accessible. Now we can load up the app and discover the gay men in our neighborhood, allowing us to be so much more connected as a group. Through TORSO, I have discovered Grindr’s use as a fantastic networking tool—and even as a support service. One guy I interviewed in Reykjavik had lost his husband of ten years and reached out to the men around him on Grindr, finding someone who had experienced similar grief to mourn with.

Looking back at my jaded beginnings, I now realize all I needed to do was let go a little and stop making it all about me. Even the men with impeccable torsos have been rejected. Now, when I get ignored on Grindr, I just have a chuckle and move on. There is so much integrity hiding behind those little square pictures; you just have to look hard enough and be willing to uncover it.