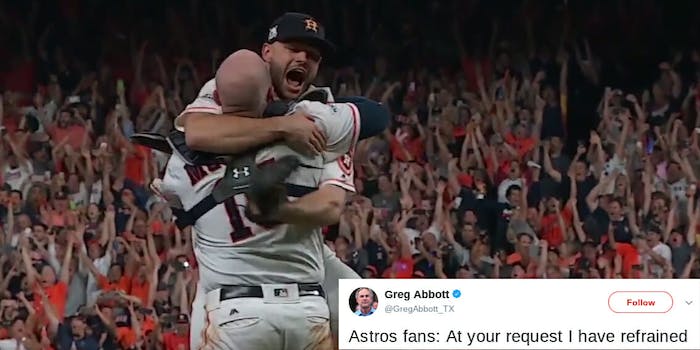 Say what you will about Texas Gov. Greg Abbott, but he clearly learned from at least one very memorable mistake.

Around this time two years ago, he prematurely tweeted out congratulations to the Houston Astros on advancing to the second round of the Major League Baseball playoffs, the American League Championship Series, despite the fact that the game wasn’t quite over yet. What followed opened Abbott up to accusations of having jinxed it; the Astros blew a four-run lead in the eighth inning and ultimately lost the game en route to losing the series.

This time around, however, Abbott consciously held off on any preemptive celebration, noting in a Twitter reply that Astros fans had been begging him not to foul things up for them again.

Astros fans: At your request I have refrained from tweeting. Now the jinx is gone. CONGRATULATIONS @Astros for going to the #WorldSeries. https://t.co/8ABU8WPS9i

For the record, Abbott wasn’t actually the person who sent the ill-fated 2015 tweet, wrongly hailing the Astros for an ALDS series victory they’d never ultimately secure. That one was from Abbott’s office account, rather than his personal account, and was reportedly sent by one of his staffers. Regardless, however, Abbott has been forced to carry the title of jinxer for the past two years, throughout which the team failed to advance beyond the opening playoff round.

But as any eagle-eyed, jinx-averse sports fan might note, Abbott has once again opened himself up to accusations of bringing bad vibes to the team. For superstitious Astros fans, the sight of the governor of Texas proclaiming that “the jinx is gone” when the team has merely advanced to the World Series rather than having actually won it could stir up a little angst.

The Astros will be facing the vaunted Los Angeles Dodgers with the championship on the line; the first game of the best-of-seven series will air Tuesday night on Fox. It’s unclear if Abbott will be watching or—more dangerously—tweeting about it.