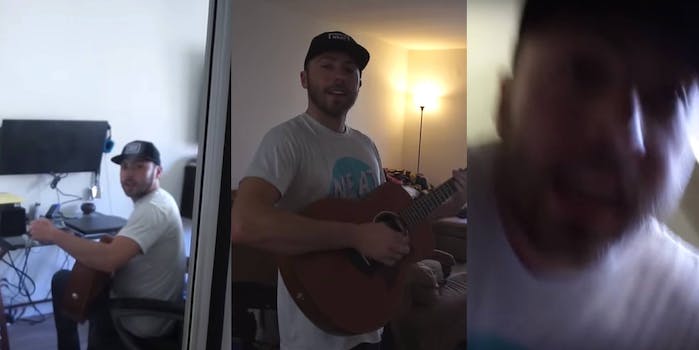 It's something extremely predictable, actually.

In one compilation video, Vine star turned YouTuber Chris Melberger latches onto the latter as a means of “annoying” his buddy Snake Rogers. From Dave Matthews Band‘s “Crash Into Me,” to Blink-182‘s “What’s My Age Again?,” Rogers picks multiple ’90s emo songs by heart, only to be interrupted every time by Melberger.

“Another turning point, a fork stuck in the road,” Melberger belts out to each tune, his rendition consistently matching Rogers’s tempo and key, as Rogers gets increasingly annoyed.

Just when you think the joke is getting old, Melberger delivers the ultimate punchline.

Despite seeming completely plausible as a prank (if you factor out Rogers’ lack of wardrobe change), Melberger’s video was actually planned and shot in under an hour. He told the Daily Dot that the clip is rooted in a joke the duo shared IRL, however.

“The concept for the video occurred when my friend would start jamming on his guitar and I would randomly sing the wrong song,” Melberger said via email. “Green Day’s just felt right for some reason because it felt like it could go with any song no matter how random the artist was.”

This is far from the first prank-styled video that Melberger’s whipped together. In 2014, the videographer created a series of vines of him screaming, causing his girlfriend Shan to scream, too. While the guitar prank video was staged, much of the scream-cam footage appears real AF (though just as ridiculous).

Some viewers have called out the Green Day video for being staged in the comments section—to which Melberger has a simple reply: “… Duh?”

“It’s also so dumb that calling it a prank felt super funny to me,” he said. “Like why would I be following my friend around all day while he plays guitar just to interrupt him with a random old Green Day classic? Plus who plays guitar while taking a shit with the door unlocked?”