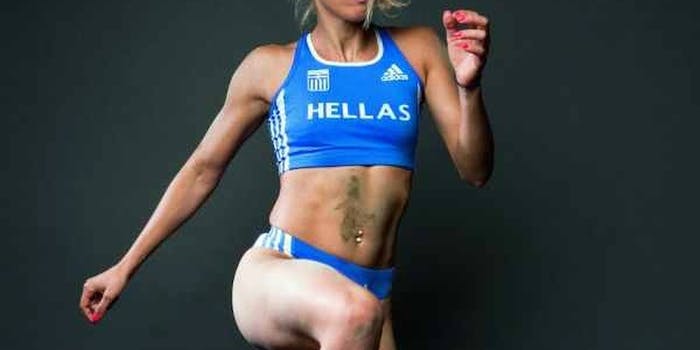 Member of the Greek Olympic team is removed for statements contrary to the values of the Olympics.

Papachristou, who has 1,319 followers at the time of writing, posted tweets which mocked African immigrants and claimed support for a far-right political party, according to the Associated Press.

“With so many Africans in Greece… At least the West Nile mosquitoes will eat home made food,” she tweeted.

The Hellenic Olympic Committee, which oversees the Greek Olympic team, announced Wednesday that the 23-year-old is out of the team due to “statements contrary to the values and ideas of the Olympic movement.” Papachristou had yet to travel from Athens to London for the Games. The women’s triple jump event starts on Aug. 3.

On Wednesday morning, Papachristou, ranked 17th in the world in her discipline, apologized. She wrote:

“I would like to express my heartfelt apologies for the unfortunate and tasteless joke I published on my personal Twitter account. I am very sorry and ashamed for the negative responses I triggered, since I never wanted to offend anyone, or to encroach human rights.

My dream is connected to the Olympic Games and I could not possibly participate if I did not respect their values. Therefore, I could never believe in discrimination between human beings and races.”

Papachristou, listed under the name Paraskevi Papahristou on the Olympics website, went on to apologize to her friends, fellow athletes, coach, and family, along with those who support her career. She finished in 11th place at the 2011 European Championships and won gold at the Under-23 European Championships in 2009 and 2011.

Last month, the International Olympic Committee issued social media guidelines to all athletes, governing what they are and are not allowed to share on Twitter, Facebook, et al.

Other Olympic athletes have been censured by their national governing bodies for sharing too much. A pair of Australian swimmers were told to stay off Twitter and Facebook after posting a photo of themselves holding guns during a training camp, and they’ll be sent home from the Games once their events are complete.