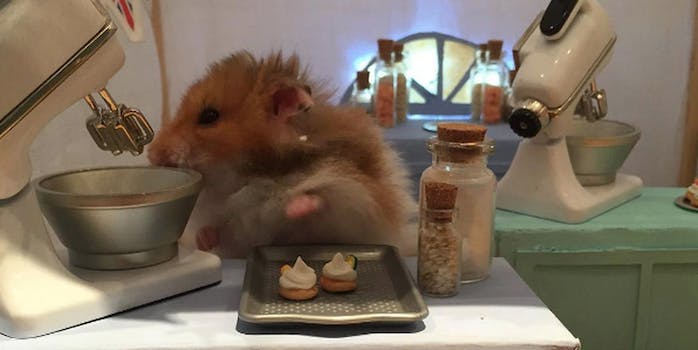 Mel and Sue would be so proud.

Hamsters have officially successfully put their stamp on the category of Making Things More Adorable By Making Them Tiny. They did it with the four major food groups—spaghetti, burritos, pizza, and cake—and now they’re at it again with The Great British Bake Off.

That perfect British reality TV program[me] already won the world over with its charming contestants, punny hosts, and dedication to delicious food over manufactured drama. But when you scale down the signature tent, complete with its tiny Union Jack pennants and coordinating pastel stand mixers, and put a couple of hamsters behind the stations, it hits brain-breaking levels of cute.

Here’s a close-up of star baker Max in the foreground:

Bake off is back and Max is busy in the tent. Extra Slice have chosen his picture to appear on the programme. Well done Max. Star baker this week #bakeoff #hamster #gorgeous #harcourthammies #extraslice #jobrand #starbaker #15minutesoffame #gbbo

Maybe Beverly Borrill, the creator of this tiny tent, can step in to put her “choux-stopping” spin on the show after it makes the move to Channel 4.