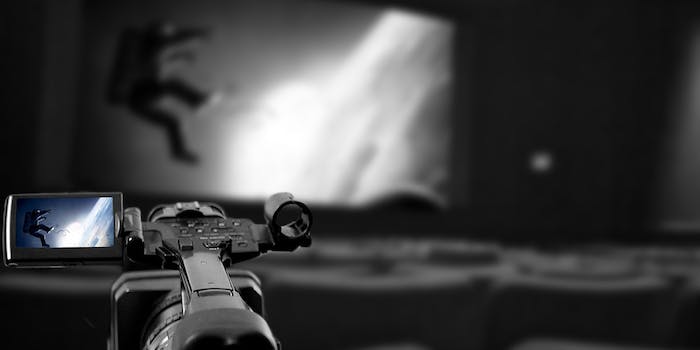 At least it wasn't the P.I.'s last day before retiring.

Sometimes, in its quest to pull out all stops to fight Internet piracy, Hollywood imitates itself.

The men, respectively 48 and 49 years old, were old school: Their method was to sit in the center at the back of a movie theater in Clinton Township, Mich., a Detroit suburb. There, police told the Macomb Daily, they affixed a camera to a chair and draped the contraption with a towel and threw a baseball cap on top, a move one can only assume the men thought made the operation seem less conspicuous.

The MPAA, as well as its musical counterpart, the Recording Industry Association of America (RIAA), has a wide playbook for combatting piracy, despite academic studies that piracy likely doesn’t impact profits. Those methods range from lobbying for unpopular Internet legislation to partnering with Internet service providers to monitor customers’ BitTorrent use to, well, hiring private eyes to scope out middle-aged men in suburban Detroit theaters.

The men’s tell was a watermark in their film that identified the particular theater, which one of the detectives said was visible in other pirated movies. When the gumshoe spied the telltale camera, he called the boys in blue, who promptly arrested the pirates.

Despite the arrest, the Internet is flush with pirated copies of Gravity, including a popular one on the Pirate Bay that was filmed in Russia and went online Monday.