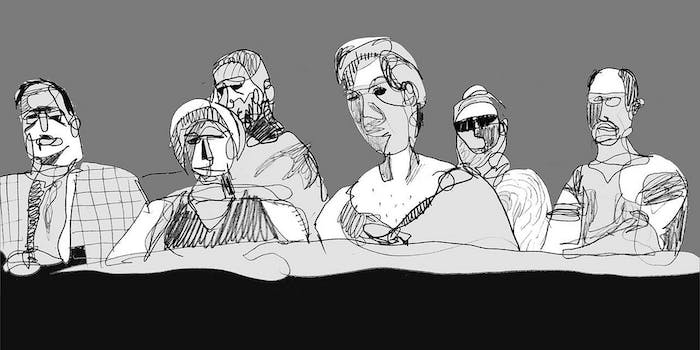 I was a grand juror, and I can tell you they indict all the time. Except, apparently, in Ferguson and New York.

To date, I’ve served on six juries. I have no idea why I’m chosen so much. I’ve spent approximately three months of my life deliberating or hearing cases. I’ve been the lone holdout in a murder trial, resulting in a hung jury: The defendant’s 11 other “peers” decided he looked guilty, and after six long weeks, they just wanted to go home. I did, too. But so did the defendant.

So one morning, when I had to report to a courthouse I’d never reported to, I brought a coffee, the paper, and a bad attitude. I suppose I should have realized this experience was going to be different than the others when we were ushered into a gigantic auditorium. Hundreds and hundreds of people were in there. We were told that we were there to be grand jurors—which was a big surprise to us all. All were invited to speak to the judge if they had any issues with serving their commitment. I wracked my brain. Surely I could come up with an excuse. I had none. At this point, all I could do was hope to not be chosen.

Except, as it turns out, by just showing up I had been chosen. I felt duped. I do not recall a voir dire-type process. I do recall being completely surprised that I was suddenly on a jury that would last six months. I mean, I’d be paid just enough to cover my parking and would receive reimbursement for my mileage. Yay! I was in entitled person’s hell.

The first Friday, I adjusted my attitude. I decided I was going to go in there and really do my civic duty. I believe in our justice system—in the absence, sometimes, of a better system. I’m a fair and impartial juror.

So, I walked in with my paper, my coffee and a much-improved attitude to meet my new co-workers. Apparently, not everyone had decided to look at the bright side. There were a lot of pissed off people in that room. Just because employers are forced to allow their employees to serve on a jury does not mean that employers are happy about it and won’t find a way to take out that anger on the employee.

As a grand jury, we would hear about three to four cases every Friday. Our first case was an immigrant who was allegedly living in the country illegally and we were to decide if there was enough evidence to charge him. The next case was the same, and the next one and—basically, it became really clear that we were there to help prosecutors charge immigrants with being in the country illegally. I feel certain that Ferguson has its own version of similar cases.

As the child of an immigrant, I have my own thoughts and opinions on the immigration situation. But to be fair and impartial, I heard and/or read the evidence and voted appropriately. On occasion we would get an interesting case. There was one that had to do with a nefarious drug cartel from Canada storing some of their product in Los Angeles. Because, apparently, Canadians have nefarious international drug cartels, eh?

While there were times that I did not agree with the decision to indict, we indicted. Because majority rules. There was not one single case during my term where we did not indict. No matter what, we always indicted. New York State Chief Judge Sol Wachtler is quoted as saying that “a grand jury would indict a ham sandwich, if that’s what you wanted.”

And after months and months of hearing cases and indicting and indicting, I truly believe that we would have indicted a ham sandwich. It was incredibly frustrating. Because there were cases where I did not think there was actual probable cause.

So, during my term, I became irritated at voting to not indict, yet as a whole, indicting case after case after case where prosecutors had not actually provided probable cause. At one point, I asked some of my fellow jurors why they had voted for indictment in cases where I felt probable cause had not been demonstrated. Common consensus was that it was easier to defer the case to a formal trial.

That’s how different the Officer Darren Wilson case was.

For months, testimony and evidence were presented to the Ferguson Grand Jury. A grand jury that had been told their six-month term would end after the “typical” four months. My grand jury was told we’d serve a six-month term and were also told that we’d most likely be let go after four months. We all had a case of senioritis the moment it was announced we’d be let go early.

So, to be fair and impartial to the jury, I cannot imagine what it would feel like to be told we were close to being done and then be told we’d have to do summer school. But that’s what happened. The jurors on the Wilson case were told that instead of being done, they’d be hearing a special case. And they ended up hearing 70 hours of testimony from 60 different witnesses.

As much as I truly empathize with the grand jurors in Ferguson, as much as I understand what they went through, I cannot understand their refusal to indict. Because, if the witness testimony is conflicting, if the medical reports are confusing, if you don’t understand why the ME’s camera battery was dead, you look at the facts and the facts only and how they apply to the law. My grand jury did this numerous times, on cases that were not as confusing as this one. I’ve read the transcripts. Facts are facts and the facts are:

1) A young man was shot and killed by an officer.

2) Twelve out of thirteen rounds were discharged.

3) No gunshot residue was found near any of the victim’s wounds, proving the shots were not fired from close range.

4) No weapons were found on or near the victim.

After reading the transcripts, after digesting all of the information, and after stripping away the extraneous information presented to just those facts, as a former grand juror, I find that probable cause has absolutely been demonstrated. And I would vote to indict.

How did they not?

It might have had something to do with an egregious mistake the ADA made in Ferguson.

Many times, in the many juries I served on, we were handed applicable legal statutes. They informed us about what to listen for as we heard testimony. I would listen to testimony and ask myself: “Does this testimony fit within the scope of the statute? Or does this evidence go outside the scope of the statute?” And I would ultimately make my decision based on whether or not it fit within the law.

On Sept. 16, Assistant Prosecuting Attorney Kathy Alizadeh handed the grand jury a piece of paper detailing that it was perfectly legal to shoot a suspect attempting to flee the scene. The Ferguson Grand Jury reviewed all the confusing evidence and testimony and attempted to make sense of it, as all jurors do.

Except it turns out that the law Alizadeh instructed the jury to use in determining probable cause had been deemed by the Supreme Court to be unconstitutional. In 1985. Three days before deliberations were set to begin, Alizadeh came clean—sorta. She needed to tell the jury to completely disregard that piece of paper. Instead, she told them not to “rely” on it.

OK, hang on. “Rely” and “disregard” are two totally different things. And it was clear the grand jurors were absolutely confused. Because all they knew, really, about the law was the information provided to them by the prosecutors. Simply: That piece of paper. And then the prosecutors said to not rely on it? I’m confused and I’m not even on that jury.

So, understandably, one of the jurors asked for clarification. A simple question: Does the Supreme Court overrule the State Court? Yup, it sure does. But instead of telling them that, Alizadeh and her cohort told them not to worry about it, that the prosecutors weren’t conducting a law class.

As absolutely sure as I was that I would vote to indict when I originally wrote this, even though my grand jury indicted all of the time, I cannot even fathom what happened here. And while I agree with myself above (I kinda have to) that when it’s all super confusing, you go with the (vague) evidence, but if you don’t understand the “cause” part of the probable cause, how could you possibly vote to indict?

I’ve heard from a number of people that if the officers simply had body cameras, we’d know exactly what happened, and none of it would be left up to conjecture and Wilson would have been indicted (or not), depending on what the camera revealed. As though simply knowing exactly what happened would ensure that a young, unarmed man would see justice served.

Except—Eric Garner’s killer wasn’t indicted. There was a video.

Grand juries always indict. Except when the prosecutors don’t want them to.

The prosecutor manipulated the jury into not indicting. I mean, were they even told about the ME’s report? Or were they simply told that Garner died of a heart attack? Were they told that Officer Pantaleo had a history of misrepresenting events in police reports and has cost the taxpayers upward of $30,000 for the privilege? Or were they just shown the initial police report that didn’t mention the chokehold? Were they even told the chokehold was illegal? That it has been since 1994 when former officer Francis X. Livoti held his nightstick against a Anthony Baez’s neck and ended up killing Baez?

Livoti’s initial indictment was thrown out, and his second sent him to trial, where he was acquitted. Federal prosecutors had to step in for justice to be served. He was finally sentenced to seven years in prison for violating Baez’s civil rights. He served five.

Despite DA Donovan claiming that he wants the Pantaleo hearing made public, he doesn’t really. No prosecutor does. Because prosecutors work closely with the police, and cannot afford to piss off the cops.

And so the police, across the board, are not held accountable for their alleged crimes. Body cameras are simply not going to cut it. Because holding the police accountable is where our system is deeply flawed. This is what has to change.

Which is why Michael Bell, whose unarmed son was killed by a police officer—an officer who’s still gainfully employed on the police force—took the money he received from the civil suit settlement and called upon the Wisconsin government to change how things are done. Wisconsin became the first state to mandate that all police-related deaths be investigated by an outside agency.

Photo via Matthew Freedman/Flickr (CC BY 2.0)