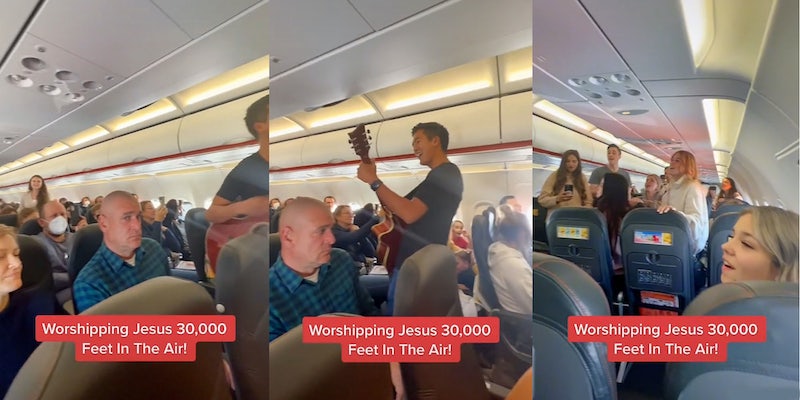 ‘Imagine you get on a plane and you have to listen to this’: People sing Christian music on plane, sparking debate

'They did this knowing it would annoy people.'

A video of a group of people singing Christian worship music on an airplane has gone viral and sparked considerable debate on social media.

According to TMZ, the video originates from a Facebook post by Jack Jensz Jr., who appears to be a pastor. Jensz is one of the founders of Kingdom Realm Ministries.

While the original post has since been deleted, numerous reposts are taking over the web. One repost by Twitter user @davenewworld_2 currently has over 18.6 million views.

In the video, two people can be seen in the aisles of an EasyJet flight singing Christian songs. Other people in seats can be seen singing.

It is unclear when this video was taken, but Jack Jensz Jr. posted the same video to his Instagram page on April 9th.

“#Jesus is taking over this Flight,” he wrote in the video’s caption. Comments for this post have been turned off.

TMZ reports that Jensz Jr. and Kingdom Realm Ministries appear to have been traveling Europe to support refugees leaving Ukraine.

This is verified in several Instagram posts from Jack’s wife Lilly.

In one post, both Lilly and Jack can be seen handling a large quantity of groceries, which they say they are collecting for refugees from Eastern Ukraine.

“Church, because of your generosity, we were able to supply a van full of medicine, food, hygiene products to two pastors who host refugees in their cities from Eastern Ukraine as well as help their congregation and city as products are impossible to get now in their area,” she writes in the caption. “They were overwhelmed with your generosity!”

“We are continuing to pray for Ukraine and doing what we can to help,” she concludes.

However, it also seems that the group’s in-flight singing may not have been a one-time occurrence.

Preaching on transport is a theme for the group. In another Instagram post, Jack says that a family “made a decision to follow Jesus during the preaching of the gospel on the train!”

The couple also posted a video of one of their in-train gospels.

“During one of the alter calls the Lord completely healed a lady of her stomach and back pain,” Jack claims in the video’s caption.

While Jack and the Kingdom Realm Ministries’ charity is appreciated, their method of spreading the gospel has sparked a debate across social media.

“As a person of faith, I implore you: don’t do this,” wrote Twitter user @kimlockhartga. “St. Francis of Assisi said it best: preach the gospel every day, and only if you have to, use words. This kind of thing just turns people off, and rightly so.”

Others speculated that had a Muslim person done something similar, passengers would not have sat idly by.

One of the people speculated about that is Minnesota representative Ilhan Omar. She reposted the video to her account with the caption, “I think my family and I should have a prayer session next time I am on a plane. How do you think it will end?”

However, some Christians claimed they would be okay with such a performance.

As Twitter user @OnthatileM_99 wrote, “I don’t find anything wrong with this video. On the contrary, I have mega respect for the people playing and singing. ‘Preach the gospel to all the world.’”