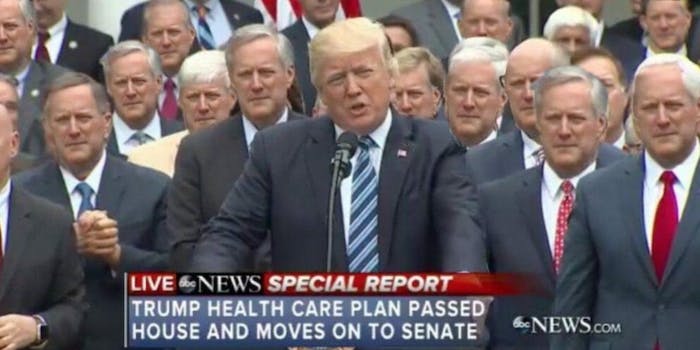 Here’s the GOP celebrating the passage of the AHCA—notice anything strange?

Look at the picture below of President Donald Trump celebrating the passage of the American Healthcare Act on Thursday with GOP lawmakers in the White House’s Rose Garden. Notice anything strange?

If not, here’s a clue, via BuzzFeed Video Producer Amanda Holland. Some of these dudes look pretty damn similar.

What if I told you…
I photoshopped the same face onto every man behind Trump. Would you have noticed if I hadn't said anything?#GOPclones pic.twitter.com/C4MERQmvLC

That Photoshopped face that appears on every GOP member except for Trump is that of Mark Meadows (R-N.C.), an influential member of the House Freedom Caucus. As Holland points out, Meadows is actually standing over Trump’s right shoulder. The rest of the members shown in the photo are white males without a woman or a person of color anywhere to be found.

Sure, there were female representatives at the celebration, as pointed out by this CNN story, but they just weren’t plentiful enough to be included in the space directly around Trump.

Holland’s trick seemed to work on some of her followers.

Honestly, it took me a solid minute to tell whether you did or not.

Woah. I actually looked at the image first and didn't notice until I read the tweet.

But this game isn’t only for the Mark Meadows of the world.