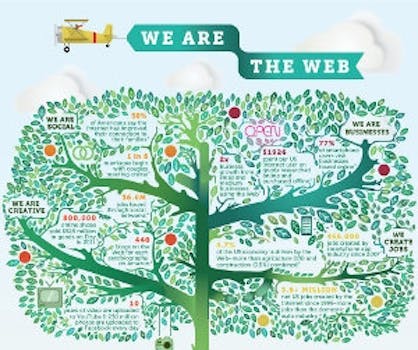 What is the power of the Internet? Google would like to know.

Google would like you to complete the sentence "The Internet is the power to...."

Earlier this year, Google was part of a powerful coalition of big Internet companies that helped topple the much-reviled Stop Online Piracy Act (SOPA). That coalition, however, largely piggybacked on the tireless online activism of ordinary folks at places like Reddit and Twitter. The search giant was clearly inspired by this online people power, and now it’s jumping into grassroots Web politics.

The company’s built up its anti-SOPA site “Take Action,” with a new, proactive campaign, launched April 10. It promises to be “the first step in building a conversation around the future of the Internet.”

It is, however, a quite tentative first step and seems primarily intended to stir the pot and see what jumps out.

“What is the power of the Internet to you?” the company asks at the “Start Something” page. “We hope you’ll join in by sharing your own story.” It then asks users to complete the sentence, “The Internet is the power to…” and share it on Google+, Facebook, or Twitter with the hashtag #OurWeb.

That’s it. Google, the folks behind self-driving cars and computerized eyeglasses and the smartest search engine on the planet want to launch a conversation about the future of the internet with a hashtag. Cue the banal platitudes sprouting up across social media. Is it too much to hope for something more creative from Google?

That’s not to say that lots of big things have not started from a few words, or just a hashtag. Reddit’s GoDaddy boycott—one of the many straws that broke SOPA’s back—began with a simple text post at the site’s r/politics section. Hashtag activism has value, and can lead to real changes. But one thing it needs to work is long-term, sustained focus around a single goal. The Internet didn’t let up over SOPA. And the Twitter users who took part in the mass movement behind the #TrayvonMartin hashtag can certainly take credit for launching that story into the national conversation.

The New York Times’ David Carr dug into the so-called “hashtag activism” phenomenon in a recent column. Well aware of its limitations, Carr nevertheless ultimately found a positive in Web advocacy’s aggregate: “Sure, hashtags come and go, and the so-called weak ties of digital movements are no match for real world engagement. But they are not only better than nothing, they probably make the world, the one beyond the keyboard, a better place.”

With #OurWeb, Google seems to be hoping to get lightning in a bottle and force another GoDaddy boycott or #TrayvonMartin movement. Whether you can force hashtag activism, however, is a big question. Google isn’t putting an issue out there, as in either of those two examples, it’s saying, hey, if you have an issue, bring it up (with our hashtag). But isn’t that, like, what Twitter, Facebook, and Twitter are for anyway?

Taking part requires just two clicks of a button. The most likely outcome is a trending topic that goes nowhere because it lacks focus or the potential for meaningful action.

“What we basically saw with the SOPA and PIPA fight was an enormous group of people interested in policy issues,” a Google spokesperson told Talking Point Memo’s Carl Franzen. “It’s been three months, so we wanted to touch base with those people and ask them what issues are important to them.”

If that’s the case, Google’s Start Something campaign have been better served with a more precise question, and not a fill-in-the-blank statement.

Apparently, we’re not the only ones who feel this way. Google itself stressed that Start Something isn’t targeting any specific legislation or policy initiatives, making this campaign feel more like a test than anything else. As Franzen notes, the advocacy groups that led the fight against SOPA and PIPA are “on high alert, concerned that Congress may yet attempt to revive SOPA or PIPA, or introduce new legislation.”

Specifically, they worry that the Cyber Intelligence Sharing and Protection Act (CISPA) is SOPA’s spiritual successor. And while the two bills are quite different—SOPA targeted piracy, while CISPA ostensibly goes after hackers—the SOPA experience proved how easily bad legislation can fall off the radar until it’s nearly too late.

This might not happen again, at least if Google thinks the legislation might hurt its bottom line. With Say Something, Google just gently dipped its toes into the world of online activism. And it’s seen some pretty big ripples.