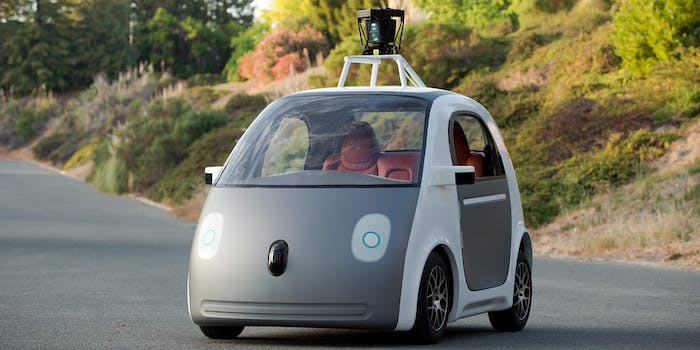 OK, Google: Take me to my favorite Thai place.

With Google’s announcement that it plans to take the plunge into ridesharing, the war over the future of getting around is about to get real, and Google’s self-driving cars will change the game entirely—a technology that industry leader Uber is starting to explore, too. The ridesharing market is clearly well out of the bag, much to the dismay of the taxi industry, and the real question now is who’s going to come out on top. It certainly won’t be cab drivers, who may become an anachronism thanks to Silicon Valley startups, and it’s starting to look like Google will reign supreme.

Aside from struggling over regulatory issues and opposition from cab drivers every time it tries to roll out in a new city, Uber has been plagued with bad public relations incidents. Cases of accused kidnappings, sexual assaults, and other unpleasant events have lowered public opinion of the company—sometimes it seems like Uber hits the headlines multiple times a week with unfavorable news items. The company’s threat to perform opposition research on unfavorable journalists aside, Uber has serious problems with its public image.

As Uber and Lyft have struggled for supremacy over the ridesharing market, with smaller firms attempting to edge in on the profits of what’s turning out to be a very profitable industry, Google has bided its time. The early warning sign for observers occurred when Google’s Ventures arm invested substantially in Uber, placing a Google executive on Uber’s board. But it hadn’t moved to compete directly—until now—and the fact that Google’s entering the slugfest should worry Uber and the rest of the field, because Google plays for keeps.

The company has two things to its advantage that other firms do not, and competitors are going to scramble to catch up. If they don’t, Google could quickly eat most of the market, with only a handful of firms hanging on around the margins—and that would be bad for business.

The first is the company’s self-driving car program. While not cleared for road use just yet, the program is extremely advanced (unlike Uber’s, which is still in the planning stages). Google’s cars are getting smarter and safer every day, with engineers perfecting the technology to create road-ready vehicles. That technology is likely to become the backbone of Google’s program, because why have a person do the work of a software product?

At Vox, Timothy B. Lee highlights the obvious advantage here: “When you take an Uber ride, the majority of the fare goes to pay your driver. With no driver, Google should be able to charge dramatically less than Uber and still make a profit.”

Google is also extremely talented at developing and delivering applications. The company’s notorious “finger in every pie” approach to our lives means that the company knows us incredibly well, but it’s also accustomed to delivering a huge array of services, customized to our needs. For Google, ridesharing is easy to integrate into existing services, and it has the development framework (thanks in part to experiences watching Uber) to create a robust backbone for the program, along with built-in customer loyalty from Google users who will appreciate the ridesharing shortcut.

With no more third party app and no more human driver, Google’s just cut out the middleman, in more ways than one. The added (or terrifying, depending on how you look at it) bonus? Google probably knows where you’re going before you do, and it definitely knows where you live.

Using self-driving cars to provide ridesharing services offers a number of advantages. In fact, it would fix a lot of the problems Uber is struggling with, as Uber has 99 problems and almost all of them are people. Self-driving cars can’t assault or kidnap passengers, and they also won’t take suspicious and frustrating “long routes,” whether designed to increase fares or traumatize passengers. Thanks to Google’s impressive engineers, self-driving vehicles will also operate on an incredibly efficient and highly optimized platform.

Instead of being subject to human error, self-driving cars will carry extensive regional maps in their memory—no more awkward conversations with drivers about obscure destinations. They’ll also be able to tap into real-time information about crashes, detours, and other issues to pick an optimal route. Likewise, dispatching will be much more efficient with an entirely automated system, getting cars to people who need them quickly. When a car drives itself, the firm also won’t be dependent on who’s on the road and feels like picking up fares.

The drawback, of course, is the perennial problem that leaves many uneasy about self-driving cars, namely, the pervasive fear that they’re going to crash and kill us—or someone else. The technology is improving, but it’s not perfect, and there are always unpredictable variables to take into account. Sometimes pedestrians dart in front of cars and onboard processing systems may not be able to adjust to new information. Sometimes cars appear camouflaged or behave unpredictably, and even self-driving cars have blind spots, in their own way.

Self-driving cars may also lack the defensive driving skills that humans can learn through experience, though Google has deliberately programmed their cars to be “timid,” as Matthew Inman of the Oatmeal put it in his description of a test ride. Over time, self-driving vehicles can learn through smart programming designed to adapt from mistakes and develop a hive-mind resource of information for a fleet of similar vehicles.

But the prospect for machine learning is cold comfort for those injured or killed in crashes caused by self-driving cars that fail to correct for or evade unexpected crises, like an oncoming car in the wrong lane, someone running a red light, or a vehicle careening through an intersection. It’s one thing when your predictive typing software finally learns how to spell Beyoncé—it’s another altogether when not being able to spell Beyoncé makes the difference between life and death.

Google may be relatively new to the ridesharing game, but it has a head start with self-driving cars backed by extensive skills in development and service delivery. Firms that want to compete, like Uber, are going to have to step up, which will involve a bit of reinventing the wheel and may distract from expansion. This, too, could be their downfall when confronted with Mountain View’s ominous tendency to smash the competition, as Google can deploy quickly across the globe while companies like Uber have to halt expansion operations to catch up.

For Uber, Lyft, and their ilk, it’s a terrible catch-22. If they don’t adapt, they’ll die, but if they do adapt, the money, time, and energy invested in adaptation may suck away their ability to live. Google has the competition right where it wants it, and it’s acutely aware of that as it prepares to get into the market in earnest—and given how long things remain in secret development at Google, it’s safe to assume that the company’s progress is much further along than anyone realizes.

Which is unfortunate for the market, because if Google crushes the competition and develops a nearly monopolistic hold on ridesharing services, that reduces the incentive for innovation. Google may reinvent the rideshare, but what happens once everyone is using Google and other services are but distant memories?