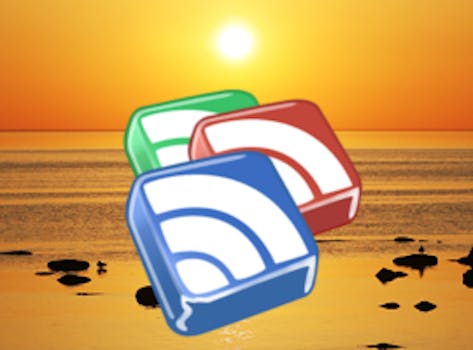 Google Reader is dead. Long live... well, we're not exactly sure. Here's how the Internet is trying to keep its favorite RSS reader alive.

In a brief statement delivered late yesterday evening, Google shocked the Internet by announcing that Reader was being given the pink slip due to a declining number of users and Google’s wish to focus on “fewer” products. (Spoken just as they begin to branch out into the Web registrar business.)

It’s no secret that RSS feeds feel a little passé lately, and that archival/bookmarking sites like Instapaper and Readability are growing in popularity. And granted, this isn’t the first time Google took a hack-and-slash approach to Reader. In 2011 they met with backlash after cutting most of Reader’s social functions in an attempt to boost usage of those features on Google+. But to millions of people just wanting one convenient spot to read all their blog updates, yesterday’s announcement that Google is sunsetting its once-popular RSS feed reader probably came too soon.

So what will we do instead? Once word of Reader’s demise went round, lists of all the best alternatives to Reader quickly popped up. But none of these alternatives, streamlined though Newsblur and Feedly might be, really delve into the core problem, which is that reader behavior is changing. In the days of an ever more diversified Internet with ever more social networking options, it’s easier than ever to keep up with what’s happening on your favorite sites without checking on them directly. You might forego adding a news site to your feed and simply subscribe to their Twitter or Facebook account instead. You might skip reading blog updates on the site and read them on your Tumblr dash. Or you might just trust Reddit or Digg to crowdsource the most interesting reading from across the Web.

None of this is to suggest that RSS feeds will be going the way of the dinosaur any time soon; and right now, apart from the option of creating a list for active Twitter feeds of regularly updated blogs, there really is no better way than a feed reader to get timely updates from your favorite Internet spots in one place. As Mashable put it in a roundup of Twitter reactions, “Some social media types suggest that RSS has fallen out of fashion, that it is unnecessary in the age of Twitter. But if that’s so, why is Twitter itself ground zero for Google Reader outrage?”

Efforts to keep Reader alive are already brimming, with a Change.org petition signed by nearly 40,000 people since last night and another at KeepGoogleReader.com with nearly 18,000.

Still, despite the groundswell of disbelief, the fact that Google is abandoning Reader when it’s still the most popular RSS reader and syncing service probably means that they aren’t expecting the denizens of the Internet to revert back to their once-daily habits of checking Reader over their morning cup of coffee, then again before they head to bed. After all, the number of Twitter users alone increased 40 percent in the last six months of 2012. That’s a lot of information already readily available in one place—and it doesn’t require the Twitter user to find a third-party sync.

Ironically, one of the best upcoming alternatives to Reader, a long in-development project from Reader fan Francis Cleary called HiveMined, is only offering project updates through Twitter and Tumblr. On Tumblr yesterday, he stated that the news of Reader’s demise had kicked his project into overdrive. But there’s no ETA on when fans might have it available.

At best, all we can reasonably expect is that new Reader alternatives will step up to diversify usage even more—and that blogs aren’t going to start cross-syncing to Twitter and Facebook any time soon.