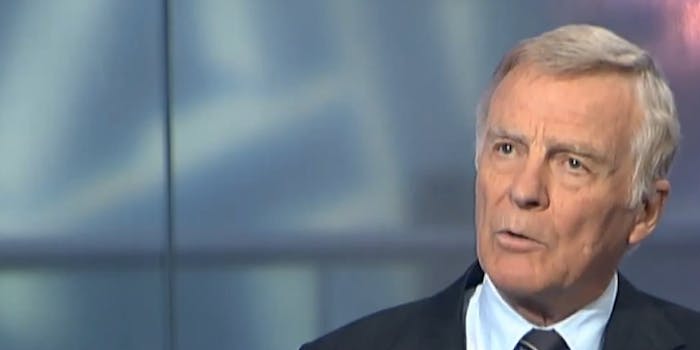 Ex-Formula One chief Max Mosley is battling Google over images from 2008.

A sadomasochistic sex party is at the heart of a Google privacy case that could lead to “automated censorship” of the Web, the company argued.

Max Mosley wants Google to automatically hide images and video from the 2008 romp from search results. In a Paris court Wednesday, his lawyers accused the firm of spreading false information about the event.

Agreeing with Mosley, 73, and ruling there was no public interest in publishing the story, a U.K. court that year said the paper breached Mosley’s privacy and awarded him $94,000 in damages. He won a similar ruling against the paper’s parent company, News Corp., in France in 2011.

Mosley’s lawyers are now demanding Google create software to automatically block pages that include thumbnail images of the video and the clip itself, The Wall Street Journal reported.

Google’s associate general counsel, Daphne Keller, wrote in a blog post that the company has measures in place to remove “specific pages from our search results when those pages have clearly been determined to violate the law.” She noted Google has removed “hundreds” of pages identified by Mosley in search results and will block others he flags.

However, the software he is requesting would be a “dangerous new censorship tool” that wouldn’t solve his problem anyway, Keller argued. Not only would such filters “jeopardise lawful expression,” they wouldn’t stop users from accessing the images through links on other websites, social networks, or search engines. Such software could even block news stories about Mosley’s case, she said.

Lawsuits in France and Germany (which a Hamburg court will hear Sept. 20) are “pilot cases,” according to Mosely’s lawyers. If Mosely is not satisfied with the outcomes, he may file suits elsewhere in Europe and California, where Google is based.

The Paris court will announce its decision Oct. 21. In the meantime, the video is still easy to find through a Google search.