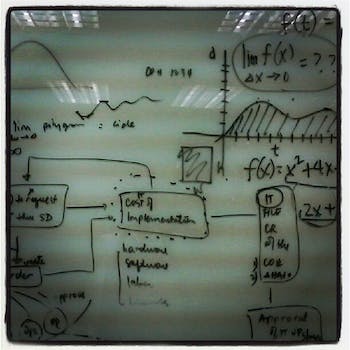 The Verge recently drew attention to a post on Quora that identified this most unlikely bug: If you search Google with a query featuring a numeral that is not logically possible, you will get pornography.

At any rate, in the Quora post, the questioner mentioned that they had entered this equation in Google: -4^(1/4). Google, as an engineer later explained, interpreted this as the instruction “return pages that feature a ‘1’” next to a ‘4’ but in which ‘4’ does not appear.”

The Verge’s Dieter Bohn has a rather less ridiculous explanation.

“As for why these pages appear,” he wrote, ”instead of something more innocuous, that’s less clear. The most obvious answer would be spammy SEO.”

On Search Engine Land, Danny Sullivan ruins all the fun by being the most logical of all, implying an accident of code in a gigantic landscape thereof.

“Somehow, somewhere buried in all the code that Google uses to rank web sites,” he wrote, “these types of queries seem to be triggering results for sites that match adult content. No doubt the bug will be fixed shortly.”