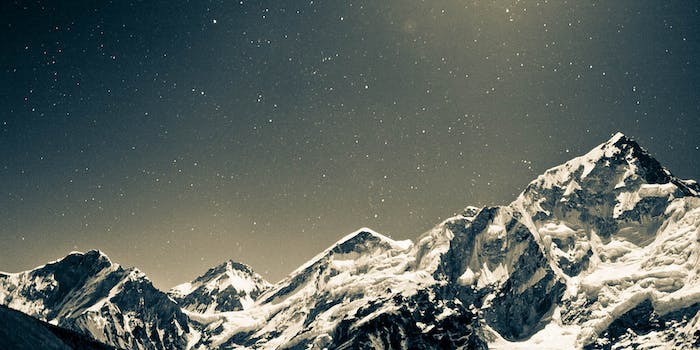 Is Google’s mission to map Mt. Everest worth dying for?

Dan Fredinburg gave his only life attempting to save the rest of us.

When a disastrous 9.8 earthquake struck the Asian nation of Nepal, paving a road of destruction and killing over 4,600 people and counting, headlines detailed at the toll the event took on those brave souls climbing the highest peak in the world, Mt. Everest. The quake ignited a massive avalanche at 18,000 feet above sea level, claiming the lives of 18 explorers and native sherpas. Among the dead is Dan Fredinburg, Google’s privacy chief for their experimental wing, Google X.

Fredinburg had his ambitious hand in many pots at Google, working on projects as varied as Project Loon (Google’s famed attempt to provide worldwide Internet access via high-drifting balloons) and the Google Adventure Team, a group whose core mission is to document the farthest regions of the planet and enter photographs and details into Google’s Street View feature. Fredinburg held a bevy of patents relating to privacy, social networks, and cloud computing and was an avid activist against climate change. A Crowdrise page to help people donate to victims of the Nepalese earthquake in Fredinburg’s name calls him “an incredible brother, son, boyfriend, friend…a brilliant engineer, and a damn good man.”

Such a loss of life might invite questions pertaining to the value of Fredinburg’s work at the top of Everest. While Street View is a useful tool for finding the best parking spots near your favorite restaurant, one might wonder whether a human life is worth the mere gimmickry of looking at the top of the world with Google’s all-seeing eye. But Fredinburg should be considered not a mere photographer bent on helping Google look cool, but as an explorer lost in a lengthy history of those daring enough to scope out the nether realms of the world for the knowledge, pleasure, and sheer benefit of the rest of us.

Street View is a useful tool for finding the best parking spots near your favorite restaurant, but one might wonder whether a human life is worth the mere gimmickry of looking at the top of the world with Google’s all-seeing eye.

While Fredinburg was working with the Adventure Team on Everest—three other Googlers were atop the base, though they were spared by the avalanche—he was also participating in Save The Ice, an organization he co-founded with the hopes of fusing extreme adventuring with raising public awareness of climate change on such sites as Everest. Fredinburg was no mere cartographer: Through Save The Ice, he not only climbed Everest but also followed the original trail of the Vikings and traversed the Maldese, all for the sake of publicizing the destruction mankind has brought across the planet.

Were he only exploring the furthest reaches of the globe for mapmaking, however, Fredinburg would still be a titanic talent. Along with working alongside sherpas to help upload the storied experience of Everest base camp to Google’s Street View, he fostered a similar effort in the Great Barrier Reef, which can now be explored via Google Maps from the comfort of your own computer.

Such work puts Fredinburg in great company. While much of human exploration was for the purpose of plunder and gold, exploring for the sake of knowledge and awareness has a lengthy history, especially in the past century. The early 20th century saw nothing short of a race to be the first to reach the South Pole, with dozens of expeditions braving the torrential southern seas and breath-stealing cold in an effort to uncover the secret world at the bottom of our own.

The first man to reach this goal, Norwegian sailor Roald Amundsen, led a team of 18 men yet not a single one made it back. To this day, Antarctica is littered with their abandoned stations. When the British explorer Robert Scott attempted to replicate Amundson’s success, he did so all too well—Scott and four of his men perished in the journey back to their base, which remains standing to this day.

Today, Antarctica is littered with the spiritual descendants of men like Amundsen and Scott. Hundreds of scientists call the continent home and dozens of countries hold research camps on the inhabitable continent, studying a wide array of topics from human health in extreme cold to the melting of the polar ice caps. Like Fredinburg, they risk their lives not for personal gain but to benefit humanity as a whole.

Another, more well-known example of the spirit Fredinburg embodied is in space. With every near or actual disaster in the space program comes the inevitable harping about whether exploring space is worth the inevitable human cost. Since 1964, NASA has suffered 22 fatalities, including the infamous disasters of the shuttles Challenger and Columbia. As space exploration becomes a popular venture in the private sector—with pending ventures to Mars from eccentric billionaires like Richard Branson and Elon Musk—critics are likely to continue questioning the value this particular brand of exploration provides us.

Today, Antarctica is littered with the spiritual descendants of men like Amundsen and Scott.

While the scientific and practical benefits provided by space exploration are as numerous as they are unavoidable—astronauts are scientists, after all—much of the recent hype around space travel portrays it as the inevitable future of humanity. As more drastic predictions for the future of the planet Fredinburg devoted his life to saying continue to shock us, it’s the firm belief of scientists at NASA and famed theoretical physicist Stephen Hawking that we face an immediate need to live elsewhere. Mars One, another private mission to the red planet, has selected 100 candidates for a one-way trip to colonize and settle humanity.

While Musk and Branson might stand to reap enormous profits from such missions, the devotion of scientists and volunteers is sparked by the same urgent need to save humanity displayed by Fredinburg. Far from yet another tie-less demigod roaming the hills of Mountain View, Fredinburg clearly considered himself a citizen of this world and hoped to raise awareness about the dire need to save it. His mission on Everest was not solely based on the adrenaline dreams of a rich boy but on the aspirational goal of salving the frayed ends of a dying planet.

Dan Fredinburg gave his only life attempting to save the rest of us.

Photo via Samhawleywood/Flickr (CC BY 2.0)