These videos demonstrate exactly what is wrong with Google Glass

It’s taken me a long time to pinpoint exactly what I dislike about Google Glass, but I’ve found it. Meet Surveillance Camera Man.

Surveillance Camera Man wanders around downtown Seattle, intrusively filming whoever he finds, deflecting questions and and refusing to react to anything less than acts of violence. It might be a political statement about CCTV, or just IRL trolling—but either way, it demonstrates exactly what is wrong with Glass.

The most frequent angry response he receives is that it’s illegal, he “doesn’t have permission”, and has to stop. Is this true? The Digital Media Law Project argues that people in public “are not entitled to the same degree of privacy as they would enjoy within the confines of their own homes”. But honestly, the precise legality is not important.

Legal doesn’t equal moral, and what’s significant is how clearly he is crossed a line of social acceptability. Even in public places, people have some expectation of privacy. They don’t want cameras shoved in their face by strangers, their every move recorded for the salacious viewing pleasure of others.

At this stage I must point out that he’s using a hand-held camera, not Glass. But this is irrelevant. Because if Google Glass achieves mainstream acceptability, this violation of privacy he demonstrates is exactly what it brings.

To look at a person wearing Glass is to look at a camera staring back at you. It puts you in a state of uncertain surveillance, never sure whether or not you are being recorded. The only indicator of when it’s eye-level, front-facing camera is recording is slight illumination of the tiny display—and people have already produced hacks to stop this happening. Terrifyingly, the same hacks also allow surrepticious recording without the Glass-wearer’s knowledge.

The internet is awash with creepshots of women in public, spuriously defended under the claim that there’s no “expectation of privacy”. With current technology it’s obvious when someone takes a photo, and creepers are forced to exercise caution. But if everyone has a camera strapped to their heads, and could be secretly recording at any time, it will compound the issue a thousandfold.

Peoples’ actions are transient. They don’t go about their day-to-day lives expecting their every word and action to be photographed or saved indefinitely for later perusal. This is why Snapchat has been such a success: for all the talk of sexting, its ephemerality resembles real human interaction far more closely than any app that came before it.

When you are under surveillance, or the possibility of surveillance, you change how you act unconsciously. You try to conform, at the expense of individuality. “When we know we’re being watched, we impose restraints upon our behaviour—even clearly innocent activities—just as surely as if we were ordered to do so”, Edward Snowden writes (despite what Disney’s teaching kids). When everyone is a potential camera, you become afraid to branch out, try new things or experiment, lest you fail and are judged in perpetuity on YouTube.

Google is determined to make Glass a consumer product. Their PR reps have been hard at work, desperately trying to undo the damage done to the technology’s image by “glassholes” and the White Men Wearing Google Glass Tumblr by sticking it on every model and fashionista they can find. 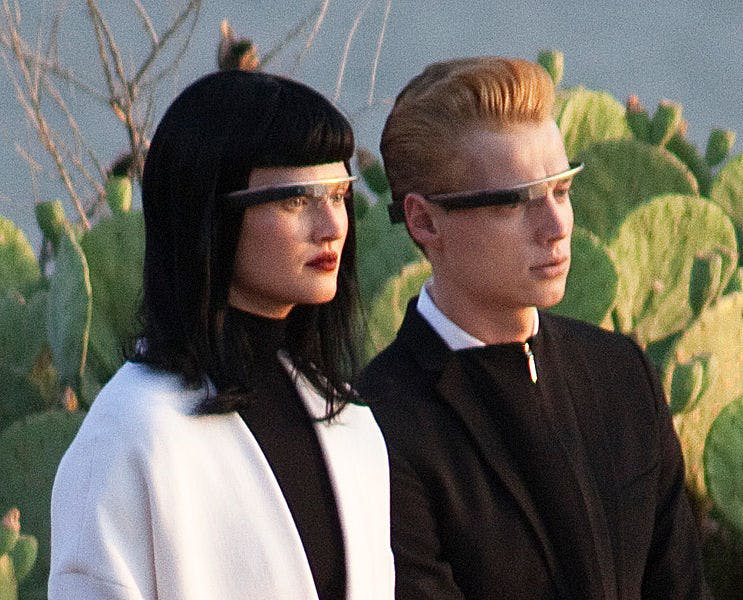 The recent partnership with Luxottica, the Italian eyewear brand behind Ray-Ban and Oakley, is the clearest sign of this push for mainstream acceptance yet.

And if they succeed, it is this vision of democratised surveillance—but surveillance nonetheless—that awaits us. Glass does not record constantly, but it’s the unknowable potential of the technology to violate our privacy that is so frightening, and has led many businesses to ban Glass outright.

Let’s not even get into what the NSA might do with data streamed straight from the eyeballs of half the population at their fingertips; after all, we know their British cousins GCHQ have few compunctions about tinkering with people’s private webcam streams.

People do give up parts of their privacy every day as they use social networks, but as psychologist Larry Rosen points out to CNN, they actively choose to do so. “People make a personal decision to check their smart phones or log in and check their social media accounts, but Google Glass is out of their control”, Rosen says. “This is someone else essentially eavesdropping on their lives, and if they want to give up their privacy, they seem to want to do it on their terms and their timeline, not someone else’s”.

Don’t get me wrong. I believe Glass is a fantastic product—in the right hands.

In certain professions, Glass has the possibility to be truly revolutionary. Hands-free location-tracking floor plans for firefighters. Real-time patient vital-signs streamed straight to surgeons’ eyeballs. Google Glass-equipped police officers would not only prove a boon to evidence-collecting and improve officer safety, but could also help to drastically cut down on abuse.

But that something is right for industrial use does not mean it’s right for our day-to-day lives. There’s a reason we don’t all drive around in tractors or talk to each other through megaphones. Whilst they’re vitally important and useful technologies, they’re not mass consumer technologies— and shouldn’t be. Google Glass is no different.

This isn’t some reactionary, Luddite response to a scary and “misunderstood” new technology, so let’s make this perfectly clear. If Google Glass becomes widespread, our society will be worse off as a result. It will make our lives worse, not better. It destroys privacy. It violates personal space. It quite clearly makes people uncomfortable.

The case of Sarah Slocum, the #thinker #creator #glassexplorer ejected from a bar for refusing to take off Glass, demonstrates this perfectly. Of course I’m not defending her subsequent mugging, but the footage (that she claimed she wasn’t recording) of people’s reactions to her Glass demonstrates just how at odds with social norms Glass is, and how much of an intrusion it constitutes, even in a “public place.”

Let’s not forget that Glass offers no-one outside of specialised industries and vocations anything new. From making calls to sending emails, the technology will save you less than a second of your time, and in return will violate the privacy of everyone with the misfortune to be around you.

We could also go into how Glass will make our roads less safe. It’s impossible for a cop to tell if it’s switched off, or being used to watch a movie whilst driving. Or how it risks encouraging discrimination against the visually impaired. Google’s drive for prescription lenses on Glass risks partially-sighted people being turned away from cinemas and entertainment venues, in case they’re secretly recording.

But this is all besides the point.

The fundamental question to ask yourself is this: are you comfortable with total strangers filming everything you say and do the moment you leave your house, with no way to stop them and no way of knowing what the footage is for or where it will end up? Because that’s the future that Google Glass promises.

Photo via Flickr/avitechwriter (CC BY 2.0)