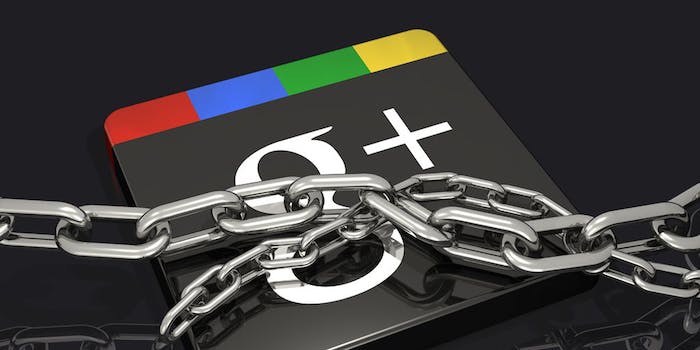 Why didn’t Google learn from the failure of Google +?

Google should stick to what it's good at: innovation.

Google has just announced that users who don’t feel like paying for their Google Play Music service can now sign up for a free, ad-supported version. The move is clearly calculated to draw in more users, luring people away from iTunes, Spotify, and numerous other streaming services. What Google doesn’t seem to understand, however, is that this is one in a long list of corporate failures that can all be traced back to the company’s paradoxical need to play catchup.

In 1998, Google was a simple search box on a mostly blank screen with a basic logo. What distinguished the company wasn’t a flashy site, but the power of the algorithm behind its search—within a very short period of time, the company was in danger of trademark dilution as “Google” became the shorthand for “search the Web.” Larry Page and Sergei Brin may have piggybacked on the growing search market, but they were smart enough to see that they needed to develop a striking product that would stand out from the pack, which is exactly what they did.

GMail, for example, marked a radical departure from traditional email services. Developers rightly recognized that the way consumers use email was changing, and that powerusers in particular were finding existing providers insufficient. The company developed a new approach to handling correspondence from the bottom up, cleverly opened it as invite-only during the beta phase to attract attention, and then released it to the public. Today, GMail addresses, like the Google search engine itself, are ubiquitous, with a huge percentage of users on free email services taking advantage of Google as opposed to Yahoo, Hotmail, and Outlook.

Over the intervening years, Google has continued to distinguish itself as a tech innovator, with internal products as well as acquisitions. The company’s sprawling campuses around the world host some of the best and the brightest of the tech industry. Google interviews are notoriously difficult to land, let alone navigate—and the sharp minds at the company are driven to constantly develop new tech products. What makes Google stand out is that these products are often at the cutting edge, and that reputation is why consumers keep coming back to the company.

The problem is that Google still seems to feel obliged to make copycat efforts when it spots popular, and potentially lucrative, online services elsewhere. One of the most obvious was Google +, launched in 2011 as Google’s answer to other social networking services. The company was clearly competing with Facebook, but the result was a clumsy service that attracted high initial interest, and then confusion as people attempted to figure out what it was for and what distinguished it from the competition.

Some loyal Google adopters stuck with the service, but those who referred Facebook were quite happy to return after their dalliance with Google +, even when confronted with Facebook’s privacy violations, war on nipples, and other issues. In an attempt to retain users, Google desperately tried to make fetch happen: indiscriminately offering an assortment of products tied in with Google + and finally resorting to making it nearly impossible to retain an identity on Google services without having a Google + account before backpedaling in response to user outcry.

It was also a strange business decision for a company that made its reputation by setting the pace, not lagging out of the gate. In an industry filled with constant innovation and product concepts, trends rise and fall on a regular basis, and even a goliath like Google can’t hope to be an industry leader on all of them. The company’s mistake is to assume that following in the footsteps of other firms is a smart business strategy, when it should be moving on to developing new products.

In an attempt to retain users, Google desperately tried to make fetch happen.

The problem is that Google still seems to feel obliged to make copycat efforts when it spots popular, and potentially lucrative, online services elsewhere.

Google is famous not just for the large array of innovative products it develops, but for the fact that it’s continually developing and testing new projects. If the company feels that something—like Wave or Buzz—isn’t paying off, it moves on, focusing on the next big idea. These decisions can cause a bit of whiplash for users who grow accustomed to and sometimes even fond of given Google products, but they help Google stay agile, which is growing especially important as its product lineup grows, particularly as it’s delving into hardware.

At Fast Company, Tim Harford discusses Google’s famously supportive approach to creativity among engineers, articulating why it leads to such good results:

A serial innovator such as Google or W.L. Gore [inventor of an industry-dominant line of acoustic guitar strings] knows that if you give smart people some space, you may get a Spitﬁre, the solution to the longitude problem, the technique for knocking out genes in mice—or GMail. A few such successes justify a lot of slack time.

The company excels at upending traditional models, not making pale echoes of products developed by companies that have come to completely dominate their field. When it comes to social networking, for example, it’s highly unlikely that any company will ever be able to topple Facebook. Friendster is long gone, MySpace resurrected itself but only for niche markets, and Ello will never be able to keep pace even as it advertises itself as the alternative to Facebook—even boldly purchasing anti-Facebook ads on the company’s own website.

The company’s mistake is to assume that following in the footsteps of other firms is a smart business strategy, when it should be moving on to developing new products.

When Google’s developers can come up with a fresh take on existing services like browsers, advertising products, video sites, and book scanning, they illustrate the company’s history of distinction in tech. When they dedicate their time to time-wasting attempts at catching up to a market that’s already too settled to break into, they make Google look like a fool.

The company has wisely chosen, for example, not to bother getting into the ridesharing market, skipping from trying to compete with Uber and Lyft right into developing self-driving cars that will likely be used on a carshare model, rather than as personal vehicles. Other creations bubbling in the company’s labs or famous Google X facility should be equally outstanding. Google has already established itself as an industry leader, and it hardly needs to reinvent the wheel.

Rather than attempting to do battle with the Goliaths of the music industry, Google should be retaining streaming services as part of its Play product suite, but moving on to other things. In this particular case, Google lost, and that’s perfectly all right, because the company should hopefully have many other tricks up its sleeve.

If it doesn’t, the company stands to start slowly bleeding users who may grow tired of shallow imitations of competitors. Google needs to stick to what it does best: challenging the market with something new, not repeating something old.