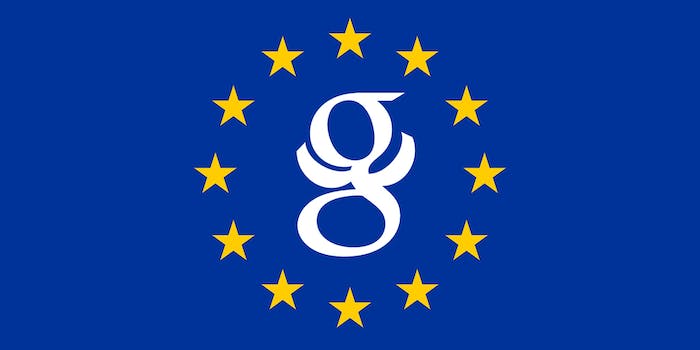 Why Europe’s war on Google may actually break the Internet

Google is no monopoly.

To say Google has been dominant in the U.S. search engine market is, by this point, a wild understatement. According to comScore, 67 percent of web searches in the U.S. in 2014 came from Google services, compared to just 19 percent for Microsoft’s Bing, and 10 percent for Yahoo. Google’s homepage has consistently topped rankings of the most visited websites on the Internet for more than a decade. In 2006, the verb “to google” was added to the Oxford English Dictionary, cementing Google’s place as not a mere company or website but as an appliance and tool in our daily lives.

But for all of its popularity in the U.S., it’s even more popular in Europe, where Google holds a mind-blowing 90 percent share of the search engine market. In many European countries, Google’s share goes even higher, reaching 95 percent in Italy, 97 percent in Poland, and a whopping 98 percent market share in Belgium. It’s this absolute dominance of the search market that European Union investigators have targeted in their antitrust suit against the American company, a charge that could give the company over $6 billion in fines.

In many European countries, Google’s share goes even higher, reaching 95 percent in Italy, 97 percent in Poland, and a whopping 98 percent market share in Belgium.

While the suit could take a decade or more to sort out, it presents an honest issue for Google and could foster real change to the overall function of search engines. Google has become such a monumental part of the digital landscape that it’s almost difficult to imagine what changes could be made to it without altering how the average consumer uses the Internet. While these charges might stick through sheer determination of a skeptical European court, they rest on core misunderstandings of how people use the Internet and Google’s supposed unassailability, as well as a brooding culture war between the U.S. and Europe.

According to EU Competition Commissioner Margrethe Vestager, Google has abused its massive market share by pushing its own services (or the services of companies that have paid it) to the top of searches on the site, most notably favoring Google Shopping and Google Travel. According to Article 102 of the Treaty on the Functioning of the European Union, any company that leverages its dominance of the market against competitors it is creating unfair market circumstances that harm consumers.

And such anti-competition practices would be a true description of Google’s actions were it an actual monopoly, but it isn’t. A monopoly denies consumers a choice in what services or products they can and cannot pursue. You, me, and everyone we know are fully capable of ditching Google Search tomorrow if we wanted to. It’s as easy to use Bing or Yahoo as it is to use Google; in fact, Bing’s market share has slowly grown, and Yahoo inked a deal last year to become the default search engine on Firefox, the second most popular browser in Europe.

You, me, and everyone we know are fully capable of ditching Google Search tomorrow if we wanted to.

Even in the specific areas Vestager and the EU have raised concerns over—namely travel and retail—Google is far from dangerously powerful or causing harm to consumers. As Google pointed out in their robust, chart-heavy response, entitled “The Search for Harm,” Google Shopping and Google Travel hold miniscule market shares when compared with the European wings of Amazon and eBay. It actively faces competition from Yelp and—as the search giant is quick to point out—regularly loses traffic and searches to native apps of such services as Expedia and Pinterest. Even when put against European companies, like Booking or Idealo, Google’s own services pose no real threat to incoming startups or stalwarts alike.

In fact, Google’s position at the top of the search market can even be called into question. One factor that has caused much broken sweat among Google shareholders is the decline in overall use of the traditional Web. Last year, consumers spent more time on their smartphones than on traditional desktops or laptops for the first time ever, and 86 percent of that phone time was spent within apps, not on the actual Web.

As consumers seem to fade away from browsers, they’ll gradually fade away from even needing search engines like Google. In the same way Microsoft seemed untouchable when it was tried by European and American antitrust courts (but is now a mere competitor), the shifting landscape of the tech market could make the EU’s case irrelevant by simultaneously reducing Google Search’s relevance.

In lieu of waiting out the end of Google’s dominance, or simply having a better understanding of consumer experience online, the European Union seems stubborn to carry on this lengthy and daunting legal mission. The actions of European nations against tech companies in recent years can be easily construed to look an awful lot like xenophobia. The dominance of American tech companies like Google is daunting to a European culture that has been mostly slow to innovate on a large scale. As Sara Miller Llana of Christian Science Monitor writes, Google has replaced McDonald’s as “the symbol of hegemony at the hand of an American cultural empire.”

Google’s own services pose no real threat to incoming startups or stalwarts alike.

It’s this status that likely influenced the EU’s decision in 2014 to enforce the controversial “right to be forgotten,” a decision that disproportionately laid the responsibility of reputation management of the entire European continent at the feet of Google itself. Just earlier this month, Facebook was handed a class action lawsuit from Austria over concerns of how Facebook uses its personal data. Last year, an Irish court challenged Apple’s tax avoidance, a charge that could cost the American phone manufacturer “billions of euros.” Amazon faces similar accusations in Luxembourg.

While there might be threads of legitimacy to some of these charges, the ambition of European lawmakers to punish American companies reeks of the sort of anti-competitive practices they’re currently levying against Google. This what Barack Obama claimed in a Re/Code interview from last year. “We have owned the Internet,” the President said, “and oftentimes what is portrayed as high-minded positions on issues is designed to carve out [European] commercial interests.” Obama even invoked the legacy of the Nazi’s domestic spying program to explain general skepticism of invasive U.S. companies.

While one could certainly make the argument that questionable privacy activities of tech companies has caused harm to consumers, these companies have not denied anyone access to where they choose to shop or travel. The EU’s charges against Google reflect not just a principal misunderstanding of the how consumer’s online habits change, but also a partiality towards European interests that is hypocritical at least and nationalistic at most. One of the reasons Google has become such a giant online is its concern for consumer experience and overall corporate ethical attitude, helmed largely by its famous slogan “Don’t Be Evil.”

If only the EU could take the same advice.