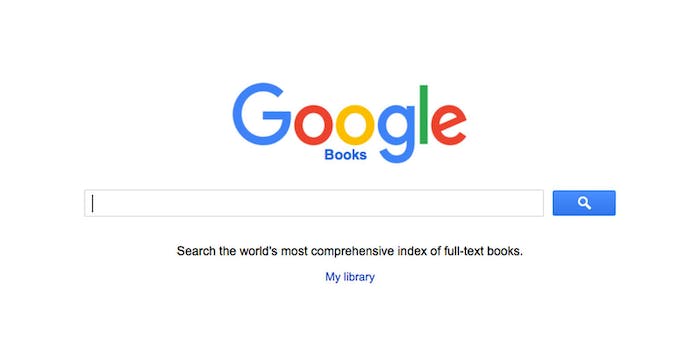 The service should have been legal all along.

Thanks to a recent court ruling, the Internet is one step closer to a reading rainbow.

After nearly a decade, Google Books finally got the decision they’d been waiting for: The platform is fully legal. On the federal circuit, as the Atlantic’s Robinson Meyer writes, judges handed down a 3-0 decision in favor of the tech titan, effectively serving orders to the Authors Guild to back off. The collective of published writers sued 10 years ago, alleging that Google’s preview pages (the digital equivalent of skimming tabloid magazines in line at the grocery store) violated the copyright of its members. This time, however, their words failed them.

The Google Books decision is a victory for authors—as the search engine will continue offering book previews that don’t devalue the publishing craft but enrich it with a much-needed online resource. And even further, it promotes the cultivation of a knowledge sharing economy on the Internet, where ideas and information can continue thriving and finding new destinations that were previously unthinkable.

As the Authors Guild maintains, “Google’s goal was to amass an unrivaled digital library, using these books to draw users to its website, strengthen its dominance of the search engine market, and increase its advertising.” In contrast, libraries don’t always have the legal wherewithal to digitize their collections on their own. And so Google allegedly skirted copyright laws to drive profits at the expense of published authors, stealing money out of their pockets and food out their mouths.

But that’s not the case. Although the company maintains search engine dominance without question, the Google Books product itself functions moreso as a service to visitors and the public at large. Since the early 2000s, anyone with an Internet connection and intellectual curiosity can skim select book passages—not the entire thing—for free and get a fair sense of whether or not they’d like to purchase the book online or find it in their local library.

Although the company maintains search engine dominance without question, Google Books notwithstanding, the product itself moreso functions as a service to visitors and the public at large.

For students in particular, Google Books serves as a convenient, reliable stopgap resource for the outdated, cumbersome databases at most college stacks. Not everyone wants to spend forever searching for keywords in library search clients—just to be directed to some obscure location to find a book that may or may not be there, depending on how sophisticated the circulation system operates.

Now, for many books lovers and nerds, that hunt for literature might feel like the search for the Holy Grail, and it lights a fire in the belly. But, for others, the opportunity cost of time and saved headaches is worth a fortune—and that’s not including the relative ease of accessibility.

Beyond matters of efficiency, though, comes the reality that the Google Books is further fueling what’s been dubbed the sharing economy, where networks of people offer shared services and goods, often at low-to-no cost. It mirrors how sharing functions in real life spaces as well, where friends may carpool to save transportation fare—as monetized by Uber’s shared ride service, for example.

To be clear, authors don’t have to make their books an open source reserve while it’s still in copyright and have every right to secure profits through online and in-store sales. But Google Books isn’t asking for the whole kit and kaboodle, limiting each available text to a brief preview of random sections. Virtually no one would bypass purchasing an engaging 300-page novel for an online preview of roughly 20 non-consecutive pages.

So then, pray tell, Authors Guild, why exactly do authors need to be protected from the likes of Google, in this particular case?

Indeed, the Guild notes that libraries can’t make copies of texts unless a copyright exception applies—a rule that can’t and shouldn’t function as an exception for major tech companies. That may mean one thing in terms of printed copies, as responsible university instructors wouldn’t copy and redistribute works without permission, which would function as both a grave ethical violation and a potentially hefty financial burden to the institution.

No author can expect any reader on the Internet to take interest in their work if potential book buyers can’t get something as simple as a few online excerpts of the text.

But the Internet just doesn’t quite work that way, and intellectual property—books, videos, photographs, and even ideas and concepts—travel, translate, and transform across digital media. One of the reasons why the Internet’s been heralded as a major cultural force is the relative ease of information and community-building tools that supplant real-life social interactions and social norms.

However, not everything translates seamlessly, as most news publishers learned in the mid-to-late 2000s, an apocalyptic period for American newspapers who hadn’t adapted well to the changing digital landscape, and a wake-up call to sleeping giants such as the New York Times. This was back when it was just enough to slap content on a basic HTML webpage and call it a day.

The same could be said for how the Internet experiences books. Now that they can be read in Web browsers via Amazon’s Kindle Cloud Reader, on the iPad, or on any number of lit-oriented gadgets, it’s not such an open-and-shut case when it comes to the availability of online book previews and digitized collections outside of libraries. No author can expect any reader on the Internet to take interest in their work if potential book buyers can’t get something as simple as a few online excerpts of the text.

As University of Maryland law professor James Grimmelmann told the Atlantic, this instance constitutes as fair use—and it’s transformative enough (or, uses source material in a new or unexpected manner) to pass legal muster. ‘This idea of transformative use as the keystone to a lot of fair-use cases becomes dominant in U.S. courts,” he said, adding, “What happens then over the next two decades is that the idea of transformative fair use itself gets extended to all kinds of new situations, including search engines.”

Without tools such as Google Books, it could be all the harder to drive book sales, capture new audiences, and preserve the availability of information that makes the First Amendment such a cherished clause.

In the decisive ruling, Judge Pierre Leval summarizes that, in the case of Google Books services, the public display of text is limited, and what’s displayed doesn’t “provide a significant market substitute for the protected aspects of the originals.” Translation: Hold on to your wig, J.K. Rowlings of the world, no one’s going to stop buying your work because a page or two is indexed by a search engine.

If anything, organizations like the Authors Guild should be grateful that big tech companies have taken such an interest in what’s often bemoaned as a dying industry, revitalizing it with the tools to reinforce the relevance of printed works. Without tools such as Google Books, it could be all the harder to drive book sales and capture new audiences.

Now that they’ve finally lost the decade-long lawsuit against Google, maybe the folks at the Authors Guild should ship over a Nexus tablet with a “thank you” e-card. If Hallmark and American Greetings can digitize their creations, libraries and authors everywhere should be grateful that they’re not digging deep into their own pockets just to offer something as simple as a free preview.