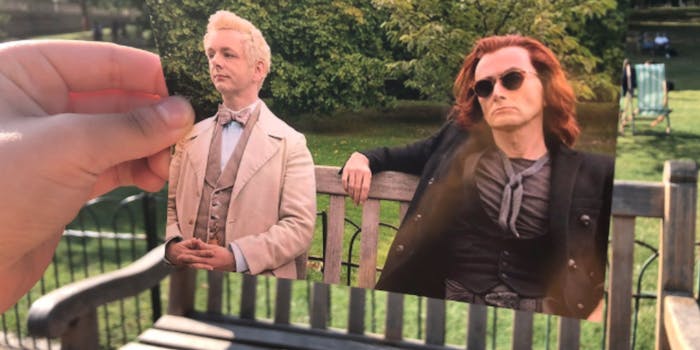 A Twitter user decided to go on a Good Omen’s tour while visiting London. She found the Amazon Prime series’ filming locations–from the benches Aziraphale (Michael Sheen) and Crowley (David Tennant) sat on to the bar they frequented.

She brought along photos of the pair, taken in the same scenes she was visiting, to recreate the Good Omen’s moments. She then shared photos of her recreations on Twitter, along with kind words about the helpful Londoners she encountered.

“As a tourist I noticed how kind the people are in London. BUT HOW KIND THEY BECAME when they saw what I was doing,” Lina wrote. “They helped me and we laughed a lot. it was AMAZING, thank you!”

As a tourist i noticed how kind the people are in London.

These are GLORIOUS! I love that the Londoners helped you. https://t.co/kCL7sA2mIQ

Amazing! I would love to do this!!

Many were curious to know how Lina found the filming locations so they, too, could go on a tour.

Hello! I hope this isn't a weird message, but I got curious about this. Could you maybe tell those places names and street names to me? I am going to London next week, and I've been planning to go to Good Omens' filming places. It could help me a lot.

That’s awesome! The question I have is where are they and how’d you find them?

Can someone take me there im very lonely

this is amazing!! I'm actually visiting London and did the same yesterday 😂😂
not the bar though, do you mind telling me where it is ?
i could still drop by there 😂

No picture of a Bentley in front of the M-25 engulfed in flames (something I assume must be a weekly occurrence)?

As it turns out, Lina is not the first person to bring along the “ineffable husbands” on a Good Omen’s recreation tour.

“Went on a little Good Omens tour with my very own Aziraphale @lilyp3no over the past couple days, and the results are quite beautiful,” Twitter user @emscrazynotions wrote, along with photos from the scenes she decided to recreate.

People were actually distracted by Lina’s comments about Londoners, as many believe them to be the exact opposite of how she described.

“I’m surprised. I just assumed that most Londoners were either annoyed or patronizingly amused by tourists wandering their city and nerding out about every inch of it,” one user wrote in response.

I'm suprised. I just assumed that most londoners were either annoyed or patronizingly amused by tourists wandering their city and nerding out about every inch of it.

People are always welcome in London, just don't stand on the left of the escalator or block the barrier 😂

I just came back from London yesterday and I was actually so surprised by how nice people were! I had the idea that they were as rude as in Paris but I was so impressed by their friendliness. It's going to be hard to fly back to Hong Kong now 😅

The official Good Omens Twitter account compared angel Aziraphale and demon Crowley working together to save the world from doom to Lina, a tourist, being helped out by Londoners.

“Another great example of good and evil working together!” the account wrote.

Another great example of good and evil working together! #GoodOmens

Either English people or Americans are confirmed evil, the question now is who

Londoners are the Crowley of this scenario, apparently.

No, they meant Londoners.

The Daily Dot has reached out to Lina.