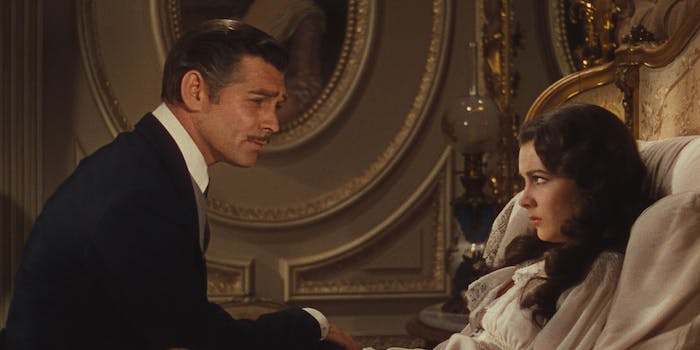 Gone with the Wind/Warner Bros.

It will return with a racism disclaimer.

Classic 1939 historical movie Gone With The Wind is currently unavailable on HBO Max after being suspended from the service due to its racist content.

Set during the Civil War, Gone With The Wind is a staple of “best movies ever” lists, a sweeping romance between two white Americans, Scarlett O’Hara and Rhett Butler.

An HBO Max spokesperson described the movie as “a product of its time,” depicting “some of the ethnic and racial prejudices that have, unfortunately, been commonplace in American society. These racist depictions were wrong then and are wrong today.” Gone With The Wind will return to the service at a later date, featuring “a discussion of its historical context and a denouncement of those very depictions.”

Back in 2014, HBO’s parent company Warner Bros. did something similar with vintage Looney Tunes cartoons, re-releasing them with a racism disclaimer voiced by Whoopi Goldberg.

While Gone With The Wind is often referred to as “a product of its time,” this isn’t always a very meaningful descriptor. The same could be said of racist or otherwise offensive art made today.

Even in 1939, the movie was vocally criticized for its racist themes, including the role that made Hattie McDaniel the first Black female Oscar-winner in history. Gone With The Wind‘s commercial popularity has always been at odds with political and ethical complaints about its rose-tinted view of slavery.

HBO Max’s decision was a predictably controversial choice, prompting accusations of censorship and political correctness from some conservative commenters.

However, the film has not been censored. It’s still widely available elsewhere and will soon be available on HBO Max once again. It will just be accompanied by a disclaimer offering historical context for its content, hopefully inspiring viewers to be more thoughtful about its racist subtext.