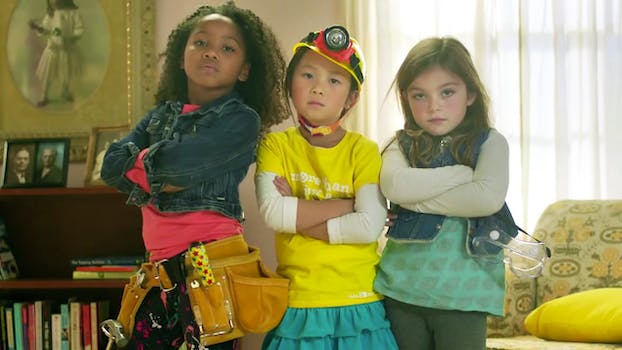 If GoldieBlox wants to one-up Mattel, they need to do better than this.

Most people know GoldieBlox as the girl-centric toy company that was sued by the Beastie Boys last year for making a parody of one of their songs without permission. That was arguably the best thing that could have happened to the budding company, for now their brand has entered the Internet’s lexicon.

GoldieBlox, which focuses on fostering engineering skills in young girls, weathered the Beastie bashing, and just last week they announced a line of action figures for girls with a new daring ad. They claim this new doll “breaks the mold” of toys traditionally marketed to girls.

Let’s start with the ad. Time described it as such: “In the ad, an Orwellian ‘Big Sister’ tells a line of young girls dressed in pink dresses and heels, ‘You are beauty, and beauty is perfection.’ The girls line up and take too-skinny, too-pretty dolls that look suspiciously like Barbie from a conveyor belt—that is until a girl with frizzy hair, overalls and Chuck Taylors shows up and destroys the machine with a hammer. Out from the decimated machine sprouts, you guessed it, a GoldieBlox doll complete with wild hair and sneakers.”

This description is mostly accurate, save for the description of the heroine of this modern-day tale. Instead of a frizzy tomboy, I see a ringer for JonBenét Ramsey, with masterfully curled, golden locks—goldilocks, if you will—form-fitting overalls and at least a touch of makeup. If we’re speaking in Babysitter’s Club terms, she’s much more Stacey than Kristy.

She’s supposed to be a badass, everygirl slinging tools, when in reality she looks more like a child pageant star whose talent is hammer throwing. This is not a knock on the way this young girl looks: It’s surely exciting for her to land an ad like this, and it makes sense for a brand called “Goldieblox” to feature a white, blonde girl. But how could they claim to be breaking the mold when their representation of a powerful girl is so conventional?

As for the figure itself, the GoldieBlox product description states, “More than just a doll, her articulated shoulders, hips, knees, and joints along with specially designed hands and feet are designed for action. With the included construction kit, kids learn how to build Goldie a 13′ zipline and send her soaring!”

The figure, just like her human counterpart, is very slim, with fluffy blonde hair and big eyes. Sure, she’s a bit gangly with a head a bit too big for her body. But that’s been done before. Bratz dolls, anyone?

Do the makers of GoldieBlox suppose this ad and product will resonate with a freckled redhead? Or an overweight brunette girl? Or a girl with any sort of disability? Or, dare I say it, a girl with a different skin color?

A majority of conversations about dolls and body image ultimately lead to Barbie, the original aspirational doll with enviable blonde hair and a killer bod. I was a roly-poly kid, with frizzy brown hair and a Barbie addiction. Though I was lucky enough to view Barbie as strictly a toy and not a life standard (no doubt an outgrowth of having the most encouraging mom in the world), she has been proven to have negative effects on impressionable young girls.

But a lead designer at Barbie HQ shared a dissenting opinion with Fast Co.Design earlier this year. “Girls view the world completely differently than grown-ups do,” said Kim Culmone, VP of design for Barbie. “They don’t come at it with the same angles and baggage and all that stuff that we do. Clearly, the influences for girls on those types of issues, whether it’s body image or anything else, it’s proven*, it’s peers, moms, parents, it’s their social circles.”

She continued, “When they’re playing, they’re playing. It’s a princess-fairy-fashionista-doctor-astronaut, and that’s all one girl. She’s taking her Corvette to the moon, and her spaceship to the grocery store. That is literally how girls play.”

And Fast Co.’s footnote is the real kicker: “A 2006 University of Sussex study concludes that thin dolls like Barbie ‘may damage girls’ body image, which would contribute to an increased risk of disordered eating and weight cycling.'” So much for that theory.

GoldieBlox’s mission is honorable, and it’s certainly refreshing to see toys that add value to the play space. “In a world where men largely outnumber women in science, technology, engineering, and math, girls lose interest in these subjects as early as age 8,” their mission statement reads. “Construction toys develop an early interest in these subjects, but for over a hundred years, they’ve been considered ‘boys’ toys.’ GoldieBlox is determined to change the equation. We aim to disrupt the pink aisle and inspire the future generation of female engineers.”

But the introduction of their new action figure ultimately feels like a step in the wrong direction.

Last week during a Q&A, Facebook COO Sheryl Sandberg addressed the dearth of women in the computer science field. “It’s this problem because it’s not even clear where you would start attacking it. You need to start earlier in the funnel so that girls don’t self-select out of doing computer science education, but at the same time, one of the big reasons why today we have this issue is that there aren’t a lot of women in the field today.” But she added, “We know that girls are just as good at math and science when they’re told theyre just as good at math and science.”

In that vein, it’s important for GoldieBlox to continue inspiring the next generation of female engineers, scientists and mathematicians, while bearing in mind that when it comes to the toy store, looks are still everything.