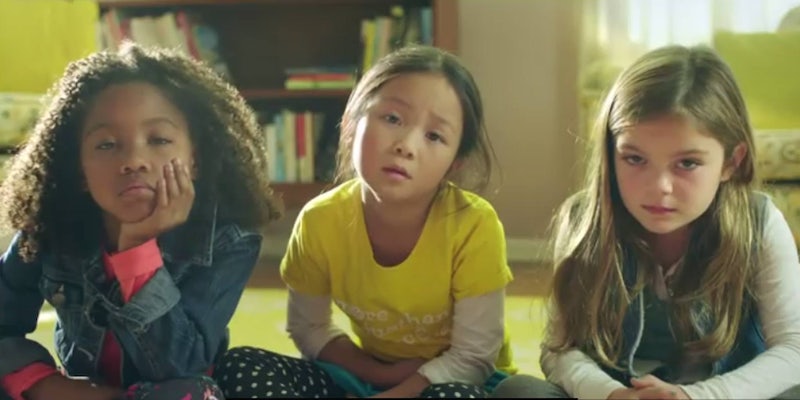 Why does there have to be a great divide between drawing pretty pink princesses and building the Large Hadron Collider?

If you have friends who have daughters, are already doing your Christmas shopping, or simply have checked into Facebook this week, chances are you’ve seen the appropriately multicultural, girl-focused Rube Goldberg machine commercial set to the Beastie Boys’ “Girls.” While I commend the ingenuity of the enterprise and the drive of its burgeoning toy company, Goldieblox, is anyone else a bit weary of this enforced, constant girl engineering power?

But I wasn’t into dolls, either. Imaginary tea parties were like, what the fuck? And I never understood the whole girls-love-horses thing. Horses were big and smelly and scary and I wouldn’t want some asshole on my back kicking me until I trotted fast enough. (Ahem.)

Just as all girls don’t choose to don head-to-toe pink, they don’t all want to build spaceships, either. Why does Math!Engineering!Power! have to be so in your face? Why can’t a girl make mud pies—and then learn to make real ones? Why can’t a boy, for that matter? There’s been a movement afoot, at least in the media, to bring home ec back. And why not? There’s no shame in that. Sure, a guy who can cook is sexy, but a guy who can sew your Halloween costumes is even hotter.

Surely kids of both genders can be exposed to a lot of things and encouraged to do what interests them, yes? Where’s the happy medium? Why does there have to be a great divide between drawing pretty pink princesses and building the Large Hadron Collider?

How about teaching girls and boys to be self-sufficient? Teach a boy to make a souffle and teach a girl to change her own oil. Can you learn that stuff later in life? Yes, but I think it’s like languages: Learning is simply more fluid, more absorbable when you’re younger.

You know what kids are going to gravitate toward? You.

Kids are mimics. They want to emulate whatever they see you doing. I haven’t been a kid in a long time (at least physically), but when I was, I imitated my surroundings, consciously and unconsciously. Some of those surroundings consisted of dirty jokes told by the older boys on the bus, but most of it was what I saw adults do, and what they did at work, and how they treated each other.

So here’s my advice for encouraging your kids to gravitate toward things that may make them successful—it’s actually my advice for being a good parent, from a person who’s not and will never be one: Don’t be an asshole. Show your kid what’s important by doing it yourself. Be nice to other people. Listen. Be genuine. And encourage your kids, but maybe try not to force them into things. Even with all the math training in the world, some girls are still going to like playing dress up. Some boys, too.

Besides, learning covers all ages: Even if you’re not a child, if you’re a chick who wants to go back to school for biology or a dude who’s always dreamed of designing, then go for it. Education, at any age, for just about anything, is really awesome.

And isn’t that what you want to teach your children?