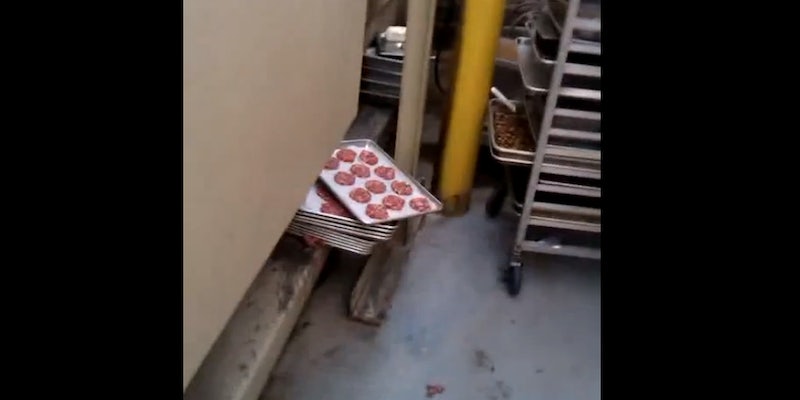 An angry Golden Corral employee’s cellphone footage of a stack of raw meat sitting by a dumpster during a health inspection became one of Monday’s most popular viral videos. The worker, Brandon Huber, claimed the meat was going to be returned to the cooler and served to customers. Gross!

Naturally, the buffet chain’s social media team began a frenzied spree of online commenting, claiming that Huber was in the process of throwing out the meat (and also that he filmed the video to try to blackmail his employer).

The alternative is too vile to imagine: That the Florida Dept. of Health’s standards are so low you can let raw meat just hang out by a can of organic detritus in the middle of summer in the Sunshine State and, well, that is completely fine. You pass.

According to a 13 News report, the restaurant did have 10 violations:

only one of which was of high priority, involving keeping raw meat separated based on cooking temperature.

Seven were basic violations, such as utensils not properly air-dried, or tong handles in the food dishes at the buffet. Food stored in a dry storage area was also not covered.

Six of the 10 violations were corrected on-site.

After receiving notification regarding the issue on June 29, the food items in question were disposed of within the hour and none of it was served to customers. Today’s health department report reaffirms that our Port Orange, Florida location continues to ensure that our customers are served food that is safe and consistent with public health standards.

Decide for yourself if you want to eat here ever again. Here’s the video: