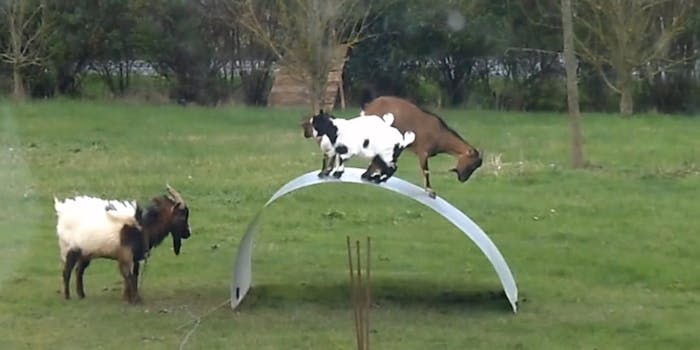 And on that day, no bleats were given.

Dear person on the Internet:

You’ve been good lately. You’ve managed to bumble your way through life without doing too much damage, you’re mostly not a waste of space, and you’ve probably made someone smile lately—even if they were laughing at you, not with you.

So for all your amazing accomplishments at being a human being, here is an adorable YouTube video of three goats surfing on a piece of bendable metal.

Because you’re so special, we’re not giving you just any video of goats surfing on a piece of bendable metal. These goats transcend the visual medium. Even without sound, the dialogue is crystal clear.

“I don’t trust it! It’s not stable!” says the wary onlooker goat. “That’s the whole point!” reply the three companions. At 0:44, when the goat on the right is like “STOP HOGGING THE WAVES,” and drums his friend off the ride so he can play, too, it’s a moment of visual poetry to rival Tarkovsky, as well as a meditation on the profundity and fleeting joy of life, the mono no aware of human existence. Also, it’s pretty damn clever.

Things you learned today: Goats are epic conveyors of the human experience, and they also know how to party.

And on that day, no bleats were given.