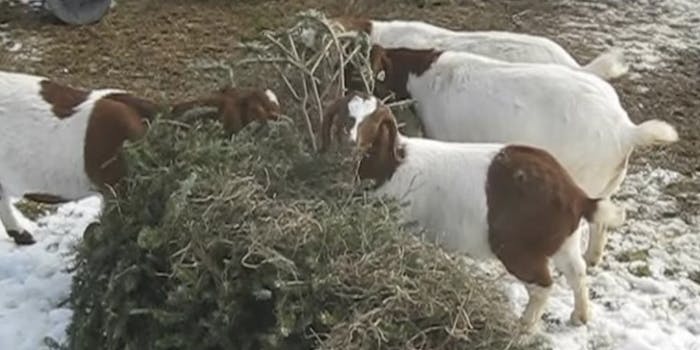 Goats love eating Christmas trees, and we have proof

They can't get enough of the stuff.

Everybody knows that the best time to get rid of the Christmas tree is on Jan. 7, a day after the Epiphany, when the Magi visited little baby Jesus. Not a minute sooner; not a minute later. But in that 60-second window of time families have to get rid of their trees, they are often in such a rush that they simply throw the tree to the curb without thinking of the environmental impact.

For the answer to this national waste management issue, families only need to remember one question: “What would Jesus do?” After the Magi, or “wise men,” presented the gold, frankincense, and myrrh, they offered their wisest suggestion to the young family. “You should feed that tree to those goats,” they said. “Goats can’t get enough of them pine needles.”

And so it began, the yearly post-Epiphany tradition of feeding old Christmas trees to goats.

See, it’s the fiber that “does them a lot of good.”

But goats are dumb, and they don’t see the nutritional value of eating Christmas trees. They just love the crunch, probably.

They’ll go head to head for the stuff!

These eager beasts will do anything for that sweet pine, so never let them inside the house before Jan. 7.