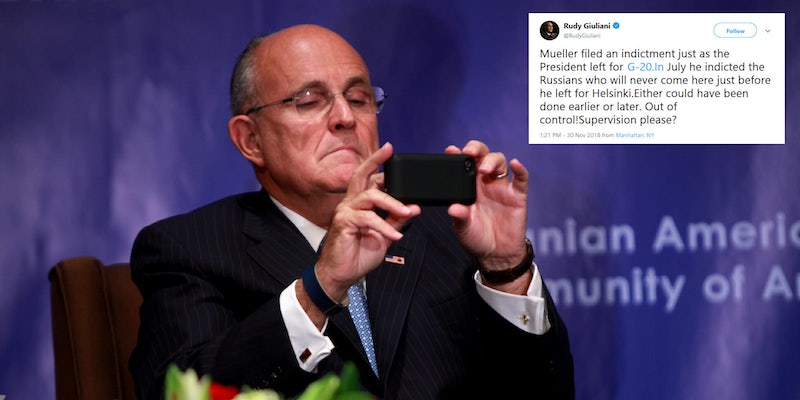 Rudy Giuliani, who is representing President Donald Trump amid Special Counsel Robert Mueller‘s investigation into his campaign, inadvertently made added a URL when composing a tweet—and someone decided to make that link deliver a very pointed message.

Late last week, Giuliani tweeted an angry statement about the timing of an indictment filed by Mueller. However, throughout the tweet he failed to use proper grammar, resulting in numerous sentences starting without a space after periods. (The president’s lawyer has a history of being bad at tweeting.)

“Mueller filed an indictment just as the President left for G-20.In July he indicted the Russians who will never come here just before he left for Helsinki.Either could have been done earlier or later. Out of control!Supervision please?” he wrote.

As Mediaite notes, the formatting of one of the typos—”G-20.In”—inadvertently converted to a hyperlink. Which, of course, someone turned into a website trolling the president.

When clicked, “G-20.In” leads you to a website with a grey background and “Donald J. Trump is a traitor to our country” written in white text.

The mistaken link (and subsequent trolling) was not lost on people, who pointed out that Giuliani was once part of a cyber-security initiative brought about by the president.

Bwahahaa – Rudy 'Cyber' Giuliani accidentally created a link in this tweet because he omitted a space. Click the link. https://t.co/fTTORTzZJR

Hey cyber security expert: you may want to check your URL. https://t.co/qZuIoOX7Rr

Others just bashed the former New York City mayor for his inadvertent typo.

In case you’ve not seen it yet: Click the accidental link Guiliani created for magic to happen…https://t.co/ERjPRXqnQP

Note to public figures: be careful with accidental hyperlinks. https://t.co/TCjcPM9H7w

Thank you, Mr Mayor. Your tweet is on point.