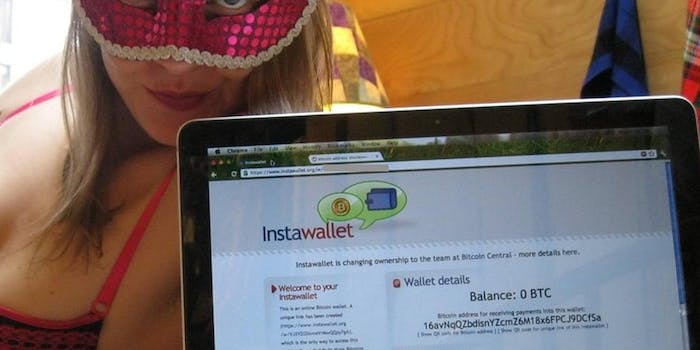 Bitcoins, the digital currency, finally get their own strip joint.

Bitcoins are a form of encrypted virtual currency whose value fluctuates depending on demand. The digital cash is currently worth $5 per coin, according to Buzzfeed. Because of the anonymous nature of the currency, Bitcoins are typically used for drugs, guns, and now, nudes.

The subreddit was created at the end of March and promoted itself by awarding bitcoins to the first 10 women who participated. Thanks in part to that promotion, r/GirlsGoneBitcoin has grown to a modest 700 subscribers.

Girls post photos of their exposed parts, along with their Bitcoin addresses scrawled in marker on their bodies, hoping that redditors will shower them with tips.

According to the “thank you” posts in the subreddit, yes.

One woman purchased fishnets and heels with her tipped Bitcoins, then posted a NSFW picture wearing them as thanks. Another woman asked for Bitcoins to buy a sextoy. Redditors obliged, and she soon also posted a NSFW image of the purchase, with the message to her benefactors: “Thank you.”

LadyBytes, the first woman to participate, has so far received 35 transactions in just under a month.

Julian702, who launched the promotional thread that helped the subreddit grow, wrote that his project had “stimulated” the “Bitcoin economy.”

More than male redditors? Probably not.