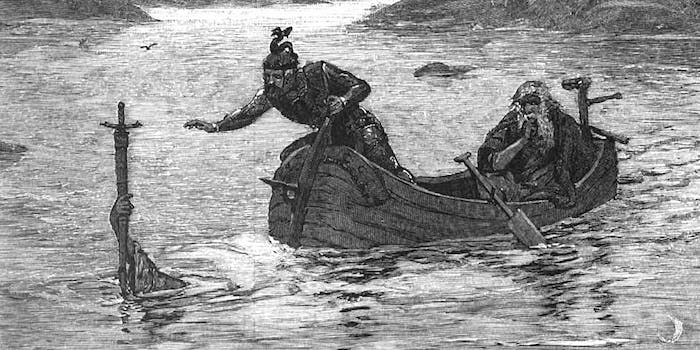 Maybe it's time for Queen Elizabeth to worry.

On Saturday, a 7-year-old girl in Cornwall, England, discovered a huge sword at the bottom of a lake, prompting comparisons to the “Lady of the Lake” from Arthurian legend.

Matilda Jones was enjoying Dozmary Pool with her dad and sister when she spotted the sword laying on the bottom of the shallow pond. According to legend, Dozmary is one of the possible sites where Excalibur was thrown by Sir Bedivere following the death of King Arthur. Matilda’s father, having told the girls this story on their drive, assumed his daughter was just letting her imagination run away with her.

“I told her not to be silly and it was probably a bit of fencing,” he told local paper the Star. “But when I looked down, I realised it was a sword. It was just there laying flat on the bottom of the lake.”

Of course, in the legend, the Lady is the one who gives the sword to Arthur, not the one who pulls it from the lake, but with a story this good, no one wants to split hairs. In fact, Twitter seems to have fallen in love with young Matilda.

this picture of Matilda Jones makes me smile. pic.twitter.com/QhS1fun480

Many people have even suggested they go ahead and crown her the new ruler of England. She is, after all, named after a possible heir to the throne.

Clearly, Matilda Jones needs to be the true and rightful King of England.

all hail the one true queen, matilda jones, first of her name and ruler of men, sword seeker and mother of us all

Someone even went so far as to make some fan art for the new would-be ruler.

Her father, ever the skeptic, has his doubts about the swords authenticity, guessing that it’s probably only 20 or 30 years old. “It’s probably an old film prop,” he said.

Whatever dude. If you don’t want to be the father to new queen of all Britons and Saxons, that’s your business. He was, however, cool enough to let Matilda keep her the weapon, which is almost exactly as tall as she is.

No word yet from Queen Elizabeth on this new upstarts challenge to her throne.