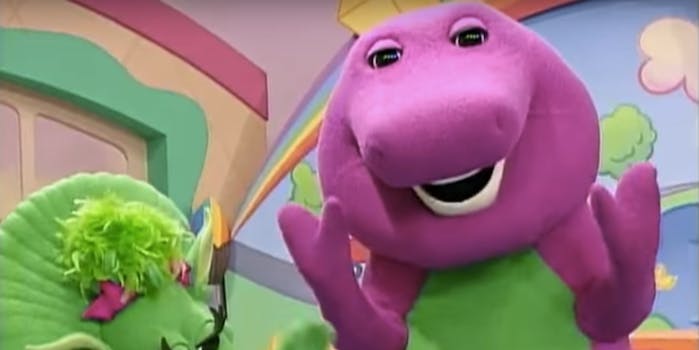 Here's one lesson from the purple dino.

Disaster struck Arkansas teens on Sunday night when a typical hangout turned into a purple crisis.

According to ABC News, Darby Risner was chilling with her pals over the weekend when she came across a Barney costume head at her friend’s pad. She wanted to scare the other teens with the huge dino cranium, but her plan backfired.

She ended up not being able to get out of the Barney head, which also gobbled up her shoulders and left her with only part of her arms flailing out of it—just like dinosaur arms.

Her friends tried to pull the head off, but to no avail. Even Vaseline couldn’t help Darby get out.

So her friend’s mom ended up driving the friends to the fire department for some assistance. Eventually, she was freed.

tfw you’re with your pals but you’re stuck in the barney pic.twitter.com/lDV6NKQfzi

We heard that Darby might be making an appearance in the next Jurassic Park movie. Keep your eyes peeled for the teen. She’ll understandably be in costume.