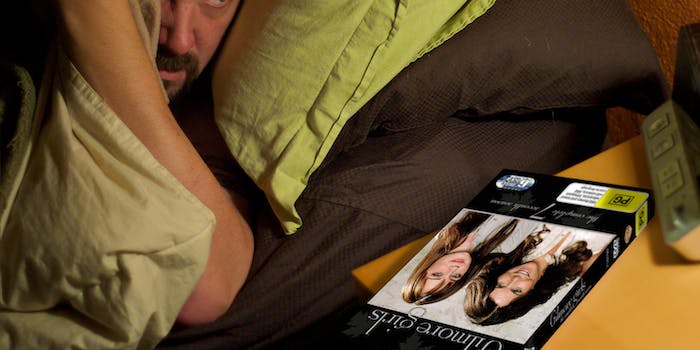 You could do better.

This summer I met an Italian guy while covering a film festival in Los Angeles. He was the programmer for a fest in Europe, trying to scout actors his bosses hoped he could trick into coming to their red carpet. (He was hoping to bag Robin Williams.) We briefly hung out, comparing our movie wish lists and coordinating schedules, until one day when we sat discussing films with a group of friends. The subject of Sofia Coppola came up, and he immediately dismissed her: “There are no good women directors.” The group pressed him on this assertion: What about Agnes Varda? Nope. Nora Ephron? Still no. Kathryn Bigelow? After all, she won a fucking Oscar. He admitted that she was “OK, I guess.”

When I asked him about this later, he clarified his position: “I just don’t like women.” Points for honesty, I suppose, but that might be the worst pick-up line I’ve ever heard.

I couldn’t help but think of his position on women in film when I heard about the launch of a podcast recapping Gilmore Girls from a man’s perspective. On Monday, the Atlantic’s Kevin O’Keeffe profiled Kevin T. Porter and Demi Adejuyigbe, the minds behind Gilmore Guys, whose first episode debuted in September to coincide with the series’ arrival on Netflix. According to O’Keeffe, each installment includes “ridiculing the often-terrible Netflix synopsis for the Gilmore Girls episode being covered, breaking down every pop-culture reference in the episode, talking about fashion moments in the show, going over all the major plot points in the episode, and giving it a rating.”

The show has quickly become the most popular Gilmore Girls podcast on iTunes (of which there is no shortage), and on top of being successful, it’s quietly revolutionary. Although a show about women doesn’t necessarily need to be for women, that too often seems to be the case. In October, Gawker published a Q&A guide to watching Gilmore Girls with your boyfriend, which assumed his resistance to such an endeavor: “This definitely, 100 percent doesn’t sound like something I’m going to like. Am I going to like it?” Gilmore Girls is a show that speaks to universal truths about friendship, family, and coffee, while throwing in jokes about dude stuff like Boogie Nights and Neil Young. What’s not to love?

In fact, if the show starred men, it’s the exact kind of thing your boyfriend would totally love—except that it doesn’t. Whereas men can have conversations about the nature of love, relationships, and BFF-ship—from The League and Louie to True Detective and Mad Men—it’s still considered a lesser form of entertainment if women do it, the kind of thing you have to place an asterisk next to. That’s why romantic comedies, a genre that used to be known as “women’s pictures,” get pejoratively labeled as “chick flicks,” without the Iron Man or Fast and Furious franchises being dismissed as “dick flicks.”

And that mentality sticks: In 2010, the Julia Roberts vehicle Eat Pray Love, based off the phenomenally popular Elizabeth Gilbert memoir, opened against The Expendables. According to Forbes, women were cool with seeing The Expendables, with Fandango polls reporting that 42 percent of the audience who planned to see the film on opening weekend was female. The opposite was not true for Eat Pray Love: Only 5 percent of users excited about the prospect of watching Julia Roberts chow on pizza and find happiness were male. This is why Gawker wouldn’t need to publish a ladies’ guide to guy movies. Women watch them all the time. After all, have you ever heard a woman say she won’t go to a movie because it has too many men in it?

This is a common truth in the movie industry: Women will watch action movies, but men won’t touch Katherine Heigl or Sandra Bullock vehicles with a 10-foot pole. According to Forbes’ Dorothy Pomerantz, this affects the kind of movies that get made in Hollywood. “For better or worse, Hollywood studios are in it to make money and that means attracting the most people possible to each movie,” Pomerantz writes. “From a purely capitalist point of view, making movies for women actually means studios are cutting out half of the audience.” As long as men turn up their nose at The Ugly Truth or The Proposal, those films will continue to be seen as “counter-programming,” the kind of niche product that only needs to be made a couple times a year—if at all.

Of course, with the much-publicized “death of the romantic comedy,” Katherine Heigl and Sandra Bullock don’t get to make those kinds of movies anymore either—Bullock is doing Gravity, and Heigl found refuge on TV. While no one will lose sleep over the loss of 28 Dresses or Miss Congeniality 3, the bias against chick flicks doesn’t just target cheesy rom-coms; it’s hurting just about anything starring women. After all, the term “chick flick” is so amorphous it could be applied to anything, and according to Reddit, it is: In a recent poll of guys’ favorite “chick flicks,” users named fare like 10 Things I Hate About You, Easy A, Mean Girls, and Josie and the Pussycats. Even the distinctly non-Heiglesque Before Sunset got mentioned.

The Telegraph’s Jojo Moyes also mentions As Good As It Gets and Lost in Translation under the lady movie umbrella, which shows just how reductive and harmful this game is. The only thing any of these movies have in common is that they all feature women in starring roles. While Moyes mentions her husband’s reluctance to watch Sex and the City 2—which is understandable, given that it’s one of the worst movies I’ve ever seen—what would stop him from seeing Lost in Translation? Sofia Coppola’s masterpiece was lauded as one of the best of the decade, but according to Moyes, a man will only watch it based on how fuckable Scarlett Johansson is or how cool Bill Murray is.

In order to get dudes into a movie that happens to have women in it, men’s websites suggest that you completely ignore that crucial 51 percent of the population. BroBible’s Christopher James calls it “the Matthew McConaughey defense”: “If you have to own up to watching How to Lose a Guy in 10 Days every once in a while, use the McConaughey defense. ‘But, dude, McConaughey is a champ in this movie. You can’t fault me. All right all right all right.’” According to AskMen, should you be watching Captain Corelli’s Mandolin, just remember it’s a Nicolas Cage movie. Having to deal with a woman onscreen, even one as lovely as Penelope Cruz, is a lot easier when you can conjure up memories of Face/Off.

In addition to the gay panic and insecurity aspects, there’s a reason men need their own cipher to feel safe. In an NPR interview with Terry Gross, the Oscar-winning actress Meryl Streep said that “men don’t live through the female characters” in the same way that Streep instinctively roots for Tom Cruise when she watches Mission Impossible: Ghost Protocol. However, a study from the Geena Davis’ Institute on Gender and Media goes further. Crowd scenes in movies (i.e., any time you see a large group of people hanging out in the background) are 83 percent male, but research shows that male viewers are blind to that their own overrepresentation. They perceive the gender ratio to be an even 50/50.

According to the Institute, an easy way to fix that is to have women direct more movies, as they tend to be more gender equal, but that’s an issue if men aren’t seeing those films to begin with. In the Wall Street Journal, Meg Cabot reports that “Hollywood’s latest tactic for trying to convince men to watch romantic comedies is to deny that the movies are romantic comedies at all.” Friends With Benefits explicitly distanced itself from traditional rom-coms. In the film’s trailer, Mila Kunis exclaims, “We’ve got to stop buying into this Hollywood cliché of true love. Shut up, Katherine Heigl, you stupid liar!” Advertised as a “non-romantic comedy,” No Strings Attached played up the guy-friendly appeal of seeing Natalie Portman in her unmentionables, but the strategy didn’t work. 70 percent of No Strings Attached’s audience was still female.

Cabot points out that, despite the difference on color schemes, No Strings Attached and the Transformers and Hangover franchises aren’t all that different. “At the heart of all of these massively lucrative franchises is a hero who will do anything to protect (or get home to) the woman he loves,” Cabot writes. “They’re all romances in disguise.” Additionally, research has actually shown that men actually like romantic comedies, and they like them almost as much as women do. One study from the University of Rochester went further, arguing that watching “chick flicks” isn’t just good for men—it’s good for their relationships. When couples watched Funny Girl, Dying Young, and As Good As It Gets together, it lowered their divorce rates.

My question, though: Who wants to date a guy who won’t watch “chick flicks” in the first place? If you’re seeing someone who is willing to categorically dismiss an entire genre of movies simply because he’s forced outside of his comfort zone, is that really the person you want to spend time with? When the Italian misogynist told me he hated movies by female directors, I pictured introducing him to my mother or grandmother—and telling them the same thing in casual conversation. I thought about what would happen if I introduced him to my female friends. How would I explain him? Would I end up having to cover for him when he says something embarrassing?

Needless to say, it wasn’t meant to be. Getting laid is nice, but if I had to choose between Gilmore Girls or spending another second with some guy who won’t watch it because it’s about women, I’d pick Stars Hollow any day.