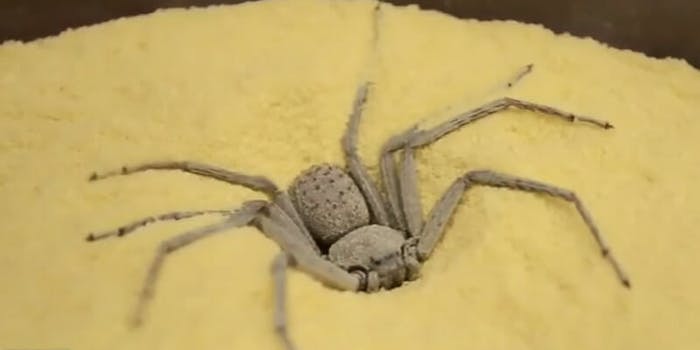 A giant 6-eyed spider has gone missing in Philly, and everyone is freaking out

This is fine. Everything is fine.

The Philadelphia Insectarium and Butterfly Pavilion in the northeast section of the city is home to thousands of live species of bees, spiders, roaches, mantises, millipedes, beetles, ants, crickets, and other types of insects—some, extremely rare—in addition to a 7,000-square-foot butterfly pavilion.

Or at least it was, before thieves broke in last week, making off with approximately 7,000 types of insects, arachnids, and lizards worth somewhere in the ballpark of $50,000.

Museum employees aren’t sure exactly how many creatures were taken because the suspects, who are believed to be three current or former employees of the insectarium, stole the logs used by the museum to keep track of its specimens. As a type of bizarre calling card, the culprits even left uniforms “pinned” to the wall with large knives.

Some of the insects have since been recovered by police, but others, including a six-eyed sand spider said to be one of the “most venomous of its kind in the world,” are still missing.

Although the story broke shortly after the robbery last week, new life was breathed into it when the Mother Nature Network tweeted out a link to their coverage of it on Wednesday—mentioning the terrifying spider that may or may not be on the loose somewhere, possibly still in the city.

Who knows! It could literally be anywhere! Maybe even right behind you!

If you see this 6-eyed sand spider that is highly venomous, please let the Philadelphia insectarium know. The spider, along with 7,000 other creepy-crawlies, have gone missing. https://t.co/EECNYfsUom pic.twitter.com/pPF15IPSG7

As the tweet to the story went viral, obviously cool heads prevailed on Twitter as people banded together to try and track down the robbers.

Just kidding! Everybody freaked the hell out, basically chalking the entire city of Philadelphia up to a loss.

HOW DO YOU LOSE SEVEN THOUSAND AND ONE SPIDERS
WHY DOES ONE SPIDER NEED SIX EYES
WHAT KIND OF RINKY-DINK OPERATION ARE YOU RUNNING, PHILADELPHIA INSECTARIUM
JUST WHAT, IN GENERAL https://t.co/0H4NEAPANA

So when are we doming off Philly from the rest of the nation? https://t.co/1U0a4mJyF0

I regret to inform everyone that Philadelphia is canceled. https://t.co/nAMCtpmHrC

And of course, a lot of people had the same joke:

Well Philadelphia had a good run it’s a shame we have to nuke the city from orbit now https://t.co/osO7QSE9pH

Guys, we have to nuke Philadelphia…and probably Pittsburgh just to be safe https://t.co/81E2qPwpc6

everyone's cool with wiping Philly off the map, right? https://t.co/IJpPRGQ50S

Somehow this is not the reason I imagined we would burn down Philadelphia. https://t.co/YczMCGTH8F

…bitch if I see a spider that big I'm burning down everything. EVERYTHING. https://t.co/QpXRnu4LI8

Jokes aside, Philadelphia is gonna be just fine. We survived the Eagles winning the Super Bowl, so I’m pretty sure we can handle some jabroni spider.