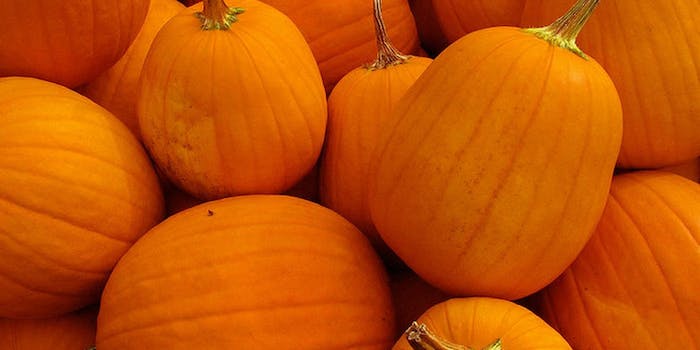 Pumpkin heist gets its happily ever after

It's a Halloween miracle.

Is there anything America loves more than a criminal with a conscience? If the Internet’s cooing over a remorseful pumpkin thief is any indication, we’re guessing no.

The initial crime came in the wake of a notable victory: 9-year-old Jaiden Newcomer of York, Penn., had won a 100-pound pumpkin by correctly guessing its weight at a nearby Oktoberfest celebration. After hefting it home—it took four adults and a wheelbarrow—Newcomer’s family proudly displayed the monstrosity on their front porch.

When they discovered, the very next morning, that their pumpkin was missing, they didn’t hold out much hope of recovering the enormous specimen; more likely, some teenagers had smashed it. Word of the disappearance got out to the local media, and two businesses gave Newcomer replacement pumpkins.

But after a weekend out of town, the family came back to find the original pumpkin replaced. Attached to it was a letter of apology that read: “I’m really sorry about taking your pumpkin. It was wrong of me. You earned the pumpkin. I didn’t think my actions through nor realize who they were affecting. Sincerest apologies.” A nice sentiment, to be sure—it’s just that we’re still so curious about the thief’s original intentions. Did he want to carve a giant jack-o’-lantern? Roast some seeds? Perform demonic harvest rites in observance of the holiday? Drop it from a great height? Unless the Great Pumpkin Burglar strikes again, we may never know.