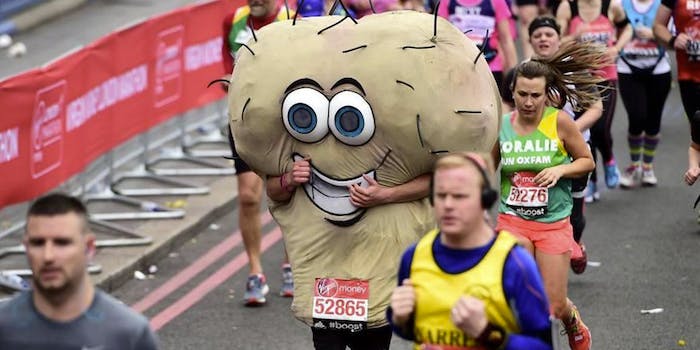 Want to raise awareness for male cancer? Running as a giant pair of testicles is a good place to start.

Twenty-two-year-old British student Jack Woodward ran with 38,000 people in the London Marathon on Sunday, but he was, in all likelihood, the only competitor to complete the race in a giant testicle costume:

Woodward participated in the event as a smiling scrotum to help raise awareness for testicular cancer, which his close friend, Rob Harris, succumbed to last year at the age of 21. The Mr. Testicles character has grown quite a fan base over the years, and had some ardent supporters at the marathon to cheer Woodward on:

Woodward has set up a fundraising campaign in Harris’ honor, although the Mr. Testicles itself is a bit like James Bond—many people have played the awareness-raising character over the years, as he’s a mascot of the Male Cancer Awareness Campaign. Here’s footage of Mr. Testicles warming up a Brazilian soccer game, back in 2007:

And we wouldn’t be doing our jobs if we didn’t include this footage of Mr. Testicles ice skating: