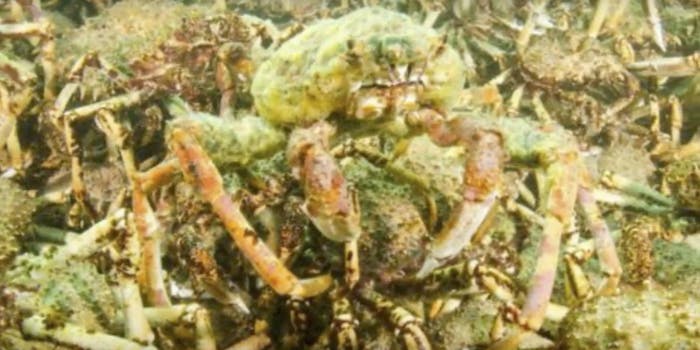 Screengrab via The Nature of Science/YouTube

This giant horde of crabs in Australia might not taste great, but they look delicious

A shitload of giant spider crabs have migrated to Port Phillip Bay in Australia to molt together and celebrate the start of Cephalopod Week.

Aquatic scientist Sheree Marris captured some dank spider crab footage that has truly captivated the web. These fascinating crustaceans flock to the tepid waters of Australia’s south shore yearly, though no one quite knows why.

Whatever the reason, humans from coast to coast want to eat them. Forget that YouTube‘s The Nature of Science doesn’t think they’re worth it. No matter the shell size, hundreds of thousands of giant spider crabs can make for a pretty bitchin’ boil.

Commenters are brainstorming all the ways they can cook these helpless crabs that are exerting all their energy on bursting out of their shell, unwittingly one step away from the grill.

Let’s also make one thing clear: A group of crabs is not called a horde. They’re typically known as a cast in science-speak. The internet has other ideas on what to call the feast awaiting it in Port Phillip Bay, however.

Did someone say all you can eat? Challenge accepted.