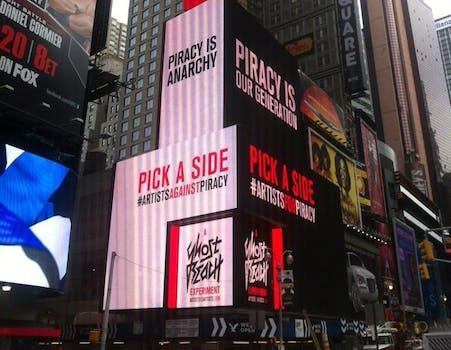 Given rare access to a Times Square billboard, Brooklyn's Ghost Beach is asking the world to throw down its stance: should musicians support or fight Internet piracy?

Given rare access to a Times Square billboard, a Brooklyn band is asking the world to throw down its stance: should musicians support or fight Internet piracy?

Little-known Ghost Beach was given access to 15,000-square-foot ad space for two weeks—a benefit of licensing their 2012 song “Miracle” to American Eagle. It asks Twitter users to use a hashtag to vote: either #artistsforpiracy or #artistsagainstpiracy.

To highlight the debate, they’ve created a website, artistsvsartists.com, where visitors can either buy the band’s album for $5 or download it for free.

It recalls Radiohead’s 2007 In Rainbows album, which the band offered on their website on a “pay what you want” model. It’s unclear how successful that was; Radiohead’s sales numbers, and how many users chose to pay, were heavily contested. What is clear, though, is which side is winning the battle of sentiment on Twitter. As of this writing, only 122 users have used the hashtag opposing piracy; 2,833 offer their support.

Ghost Beach’s Twitter account has gone on a retweet spree, mostly illustrating artists who are on the pro-piracy side. “The exposure artists recieve thru file sharing is a fair trade off,” tweeted @noosamusic. “A record sale is a plus, but fan is a fan!”

The band itself, however, bucks that trend, even though singer Josh Ocean claims their music has always been available for free.

“We are #artistsagainstpiracy,” @GhostBeach tweeted bluntly, after filling their feed with opinions to the contrary. “We believe in using new music sharing platforms to combat illegal downloading.”